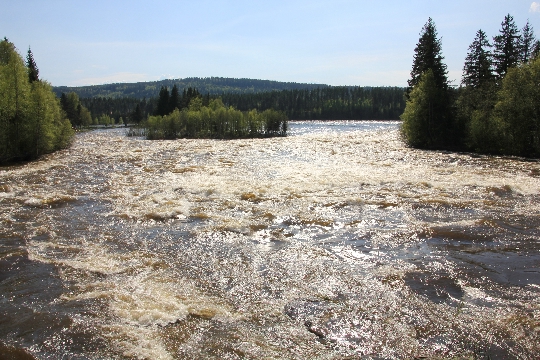 Rivers of Norway, due to the special geographical situation of the country, have a number of features. Basically, it is a typical mountain river flowing through a deep narrow valleys.

Geographically, the river passes through the lands of the eastNorway is the longest in the country - 604 kilometers. The source of the river - lake Eursunn (Røros town) in the county of Sor-Trondelag. Place confluence - Oslo fjord water (about Fredrikstad city).

When passing through the county of Østfold riverIt is divided into two ducts. East goes through Sarpsborg (here is a powerful North European waterfall - Sarpsfossen). West duct transit crosses the lake and Isnesforden Visterflu - Ogordselva.

On his way Paatsjoki passes through several lakes, forming a great valley. The biggest tributary of the river is considered Nautsiyoki River.

The river bed plays the role of natural boundariesbetween Norway and Russia. Water Paatsjoki rich in salmon and fishing are permitted, but care must be taken not to accidentally cross the state border.

The riverbed runs along the border between the two countries -Norway and Finland. The total length of Tanaelv - 348 kilometers. And it is the fifth-longest river of the country. The source of the river - confluence of two rivers - and Anaryokka Karashyokka (Inaryoki). This place is located about twelve kilometers from the town of Karasjok.

The river is popular among anglers becauseHere it is found a lot of big salmon. For example, in 1929 in the river to catch more Atlantic salmon, 36 kilograms of weight. In connection with the large-scale climate changes in the waters of the river began to meet the so-called "Russian salmon."

Otra ranked eighth in the list of Norwegianrivers, since the total bed length of 245 kilometers. The source of the river - Mountain Setesdalsheina (Lake Breidvatn). After this, the Otra comes down to Kristiansand, and after that the water flows into the Skagerrak strait.

In the waters of the river found a lot of salmon.