Tourism in Norway - the development, photo 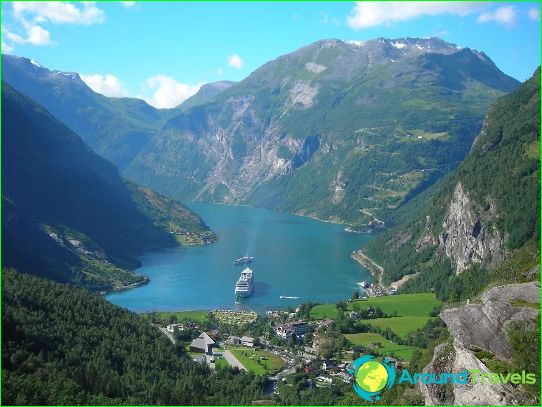 Severe land, descendants of the ancient graveViking, restrained beauty of the fjords and the unique northern lights - and it's Norway. It is interesting, first of all, for the tourist, who had already traveled half the world, and wants to open new lands and amazing places.

Hiking in Norway is based on naturalwealth, the exotic beauty of the fjords and the Arctic, as well as the high level of development of the ski resorts, which are particularly popular in recent years because of little snow winters in central Europe.

On the way to

In Norway, good transport linksbetween large and small cities and regions. In Oslo and other fairly large towns are almost all forms of public transport. Especially for the guests of the country offered a tourist map, which allows you to visit museums for free and move around the city without tickets.

Western Norway, a country of fjords, offersthe most convenient form of transportation on water, but you can choose a high-speed boat, catamaran or ferry. Another special route that resembles attraction "Rollercoaster" - railway Flomsban walking through mountain passes.

Activities in Norway, as well as in neighboring countriesScandinavia does not pose great danger for tourists. It is gathered, not to keep open money and jewelry, watch out for your luggage - the observance of these simple rules will significantly reduce the risk of robbery.

Travel to the country of fjords

Lots of winding narrow bays andscenic rocky coast - a fantastic spectacle, which has already appreciated by thousands of tourists. In addition, it is located in Norway, Sognefjord, the largest and deep bay in Europe, who by his visitors have seen the Norwegian grand title of "King of fjords".

No one was surprised that in this Scandinaviannaval power is a special celebration in honor of this unique natural phenomenon. On this day, many tourists especially in a hurry to the north of Norway, not only to pass on one of the most beautiful bays, but also take part in the festivities, scientific forums and concerts.

Fantastic creatures, which appeared in Norwegianliterature and won the love of children and adults around the world, could not become part of the tourist routes and programs. On a high rock, the road to which there is a steep serpentine, placed the whole country trolls, where there is a mountain with a funny name "Cap troll", a shelter and a church.