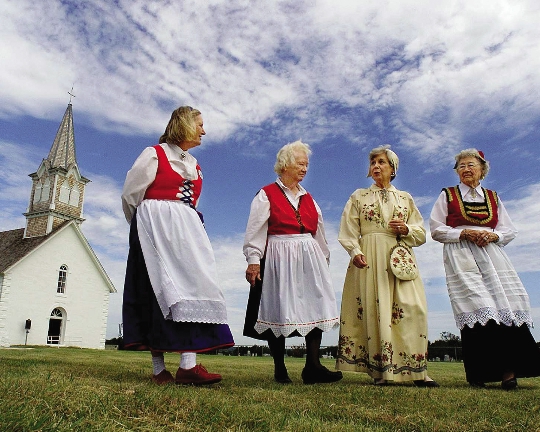 One of the most northerly countries in the world,Norway over the centuries has shaped their customs, in which there was a place and the ancient traditions of the Vikings and medieval legends and unique culture of the peasant. The cold climate, sparse nature and medieval laws formed the special traditions of Norway and its people today saved with particular trepidation.

What are they, the Norwegians?

Residents of Norway is not too adhere to the rulesetiquette, what fault of their simple peasant past. They will not exhaust yourself with doubts as to call the source, but because "you" - here it is the polite form of address. Kissing at the meeting it is considered to be unhygienic, and shaking hands and touching cheeks, quite common.
Forbidden topics in communication on the traditions of Norwaycalled material issues. Not to ask others about the value of income or salary, with gossip about material prosperity some third party is not forbidden.
On a visit Norwegians without notice and invitationdo not go, and coming and coming, certainly must tell the owners the exact dates of departure. Breaking them will not succeed, as the host country on the appointed day and hour she will point to the door. Norwegian traditions prescribe to say thank you for the hospitality and every new visit accompanied by words of gratitude for the past reception.

The main celebration for any descendant of the Vikings -Constitution day. It is celebrated on May 17 and, despite the apparent formality, this holiday is quite a family and a home. Traditionally, Norway on May 17 starts with a joint breakfast, after which all members of the names sent to the solemn procession through the streets of the city. Norwegians evening rally at the table, beautifully decorated in traditional colors of the national flag.