Home>Articles about Panama>Flag of Panama: photos, history, meaning of colors of the state flag of Panama 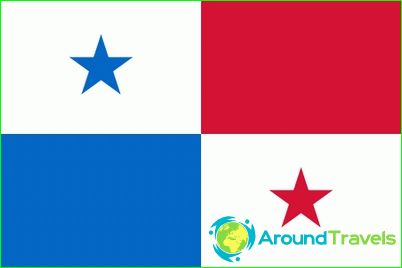 State symbol of the Republic of Panamaactually it appeared in December 1903, when the country declared its independence from neighboring Colombia, as part of which it has existed more than 80 years.

Description and proportions of the flag of Panama

Rectangular panel - a classic formthe flags of the overwhelming majority of world powers. That is also the flag of Panama. Its sides are related to each other in a ratio of 2: 3, and a flag field itself is divided vertically and horizontally into four equivalent parts.
The bottom rectangle is disposed at the basePanama flag, has a bright blue color. It serves as a symbolic representation of the waters washing the Panamanian land - the Pacific Ocean and the Caribbean Sea. Above him is a white field with a bright blue five-pointed star at its center. This part of the state symbols of Panama recalls the importance of the world. The same white field, but with a red star in the center - at the bottom of the free edges of the flag. The upper outer rectangle of cloth - red. It is a tribute to all the patriots, to shed blood in the defense of the country's sovereignty.
Official description Panama flagstate law treats the color on the cloth slightly different. The red color represents the Liberal Party, and the blue - conservatives. The blue star in the flag of Panama epitomizes the best qualities of the Panamanian people, the honesty and purity of his intentions. Red Star - symbol of the inviolability of the law and the power to represent him.

The history of the flag of Panama

The modern State of Panama flagpresented to the Constituent Assembly in 1903. Some time later, the state authorities have approved his body as an integral symbol of the state, and in 1925 it was enshrined in law. Every year on November 4 the Republic of Panama celebrates Flag Day as a holiday glory of the nation and its pride.
Earlier in 1823 was proposed flag, flagwhich is divided horizontally into thirteen equal stripes, seven of which were red, and six - yellow. The rectangular Kryzhi located near the staff, on a blue field two stylized golden sun were inscribed, connected by a narrow isthmus. This character reminiscent of the Panama Canal, which connects the two great oceans.
The project was not approved by the authorities and there was only a part of the historical past of a small country of great importance in Central America.

Activities in Lithuania in November: the prices and ...

Meals in Norway. Prices for food in ...