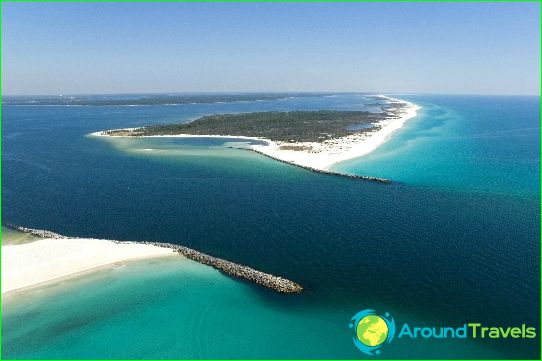 Panama is located in South and Central America,occupying the Isthmus of Panama. The country's territory stretches between the Pacific Ocean and the Caribbean Sea. Panama is bordered by Columbia and Costa Rica. The islands of Panama are very popular among tourists. Among them there are areas of land of different sizes, from miniature to very large. Many of the islands are densely populated. Previously Panamanian territory inhabited by Indian tribes Choco, and Kuna guayyami. Today most of the population is represented by mestizos. Panama is also home mulattos, negros and Sambo.

The territory of Panama has a rugged terrain. The highest point is the Baru Volcano, located in the Chiriqui province. The government was widely known for the Panama Canal, created with the help of the United States. Canal stretches from the Pacific coast to the Atlantic. It is considered the longest artificial canal on the planet. During the year it held more than 12 thousand ships. In the north-east of the Gulf of Panama (Pacific) is an archipelago of Las Perlas or the Pearl Islands. They are 70 km away from Panama City. Their total area is over 329 square meters. km. This group is made up of 200 small islands and 16 large. However only 90 of them are designated. The largest island of the group is Rey, where pearls are extracted. In addition to his popularity with tourists are those on the islands like San Jose, Saboga, Pedro Gonzalez, Mogo-Mogo and others. The Europeans will accept this archipelago of more in 1513

A well-known resort in the island today isContador. Together with the adjacent O-you, he enters the area Kuhn Java. Under this name, Panamanians understand the formation of the island. People there live in the buildings created from bamboo and palm trees. He engaged in fishing and transportation of tourists. Almost all the islands of the archipelago are different spectacular scenery. There are beaches with white sand, turquoise sea water and tropical forests. Some of the islands are surrounded by reefs and sand.

The islands of Panama are also in sekasa archipelago. It is a series of sparsely populated islands in the Pacific Ocean. The natural world on uninhabited areas of land considered to be unique. Near the Caribbean coast of the country is San Blas archipelago. His island has always been the territory of the Indian tribes. Currently, they are the autonomous region of Panama. In the north-eastern part of the country, in the lagoon of Chiriquí, is the archipelago of Bocas del Toro. It consists of 9 large and 52 small land area and more than 200 reefs. This region is one of the best areas of the country.

The islands are located in the zone of Panamasubequatorial climate. the rainy season is observed from May to November. At this time, torrential rains almost every day. In the remaining months in the country is dominated by the dry season. The heat is transferred to hard due to the high humidity. Panama is located in an area where you do not penetrate into tropical cyclones, inherent in many areas of the Caribbean.

The capital of China: map, photo. What is the capital city in ...