Home>Articles about Paraguay>Paraguay Flag photo, history, the value of the state flag colors of Paraguay

Paraguay Flag photo, history, the value of the state flag colors of Paraguay 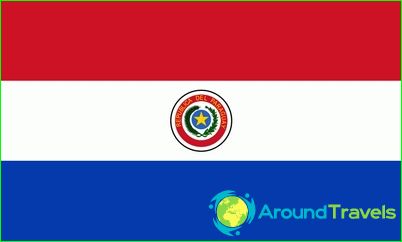 State flag of the Republic of Paraguay has been confirmed as one of the main official symbols of the country in November 1842.

Description and proportions of the flag of Paraguay

Paraguayan flag rectangular panel hasclassical form adopted in the majority of countries in the world. Its sides are related to each other in the ratio 5: 3. The flag is a tricolor of Paraguay, which field is divided into three equivalent horizontal stripes. The lower part of the Paraguayan flag is made of bright blue, the middle of the rectangle - white, while the upper band is colored bright red.
On the front side of the flag of Paraguay in its center,white field at an equal distance from the edges of the flag is the coat of arms of Paraguay. On the reverse side of the flag in the center of the print is applied the Treasury of the State. Flag of Paraguay - the world's only state flag which marked the different logos on the front and back sides.
Three stripes on the flag have their valuethe people of Paraguay. The colors of the flag of the state of France repeated colors of the flag symbolize liberation. Red color - is patriotism and valor, white recalls the desire for peace and unity, and blue means love, peace and freedom and the capacity for self-development.
Coat of arms of Paraguay appeared on the cloth of the flag in 1990year. In the center of it on a white background five-pointed star inscribed gold color, bordered by a wreath of palm and olive branches - symbols of peace and prosperity. Circling made the inscription "Republic of Paraguay" in Spanish.
On the reverse side of the flag of Paraguay appliedState Treasury seal. It is a round white box in the center of which depicts a gold lion guarding the red Phrygian cap. This symbol is found on many coats of arms of various world powers. The meaning of the image of the Phrygian cap is one - it symbolizes the desire for freedom and progressive revolutionary changes.

The history of Paraguay flag

Paraguay flag was adopted in 1842, when the country gained independence from Spain in the composition of the self-proclaimed state of Rio de la Plata, and then separated, and the sovereignty of Argentina.
Throughout the period of existence of the flag of Paraguay, he underwent some minor changes, which dealt mainly with the figure of the emblem and seal of the Treasury.

Copenhagen Stores. Shopping malls and boutiques in the ...

Holidays in Seychelles in December: the prices and ...