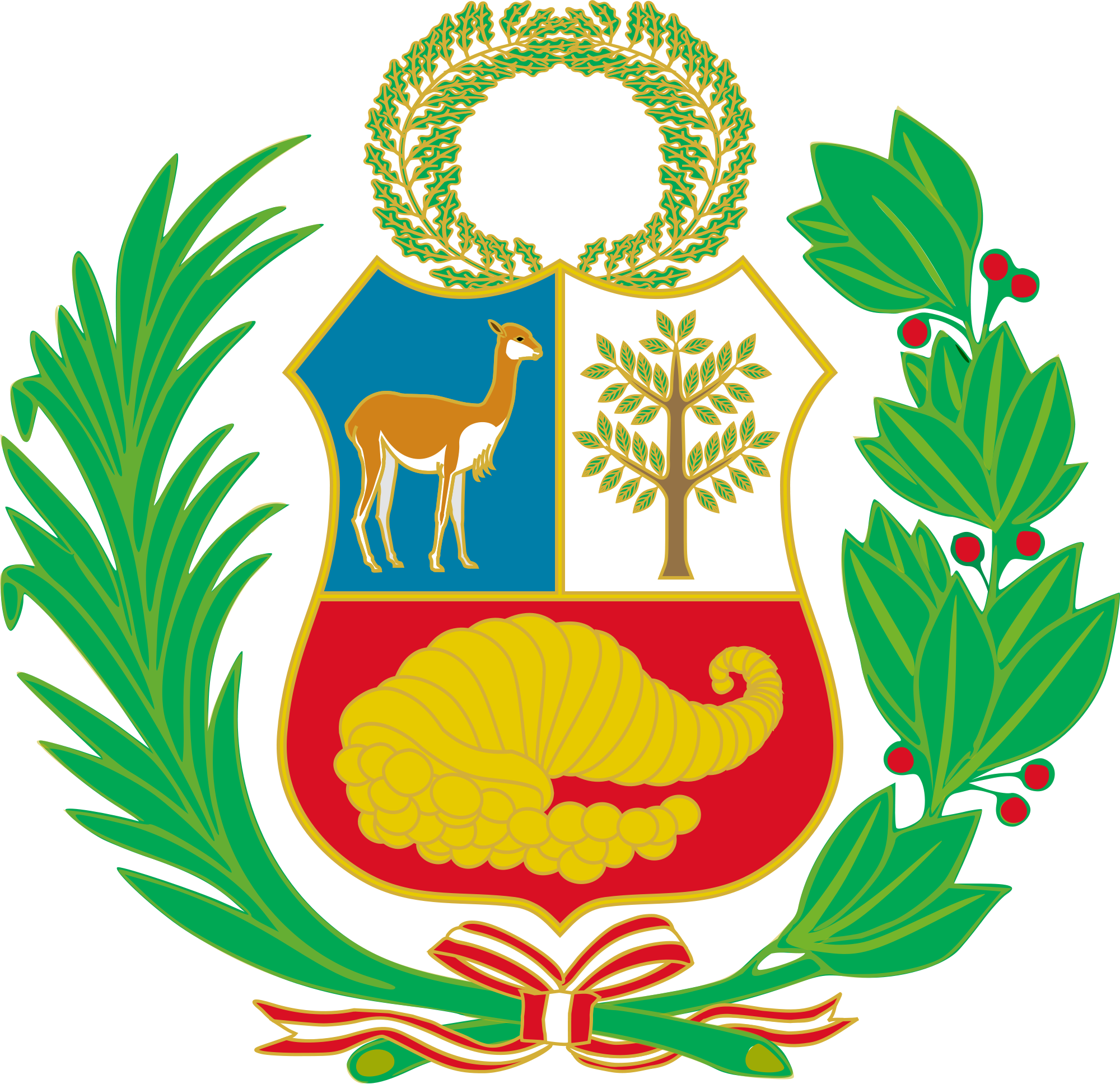 One of the most mysterious countries on the mapworld famous for its unique ancient culture, for some reason, when you select the main symbols of state drew attention primarily on the natural resources. Therefore, the official emblem of the modern Peru contains images vicuna, cinchona tree and a laurel wreath, and not what some ancient idols.

The main elements of the coat of arms

Peruvian official character exists in twovariants, one of which acts as the country's coat of arms, the second - appears on the state flag of Peru. The central place is given to the heraldic shield, a field which is divided into three unequal parts.

Three symbols appear in different parts of the field: golden horn of plenty on the scarlet; vicuna on an azure field; cinchona on white (silver box). Each of them has an important load and has its value. Cornucopia is presented in gold colors with gold as coins, which in itself speaks of the inhabitants of the country's quest for material wealth and spiritual wealth.

It is also a kind of reference into the depths of history,an allusion to the first meeting of European travelers with locals. Guests for the first time, got into the territory of Peru, were smitten with a huge amount of gold, which did not have such importance for the local population, both in the European powers.

Another interesting symbol on the coat of arms of the country -vicuna, beautiful and slender animal kind lamas. Many European researchers are the main symbol of Peru argued that the emergence of relative alpacas can be considered random, it assumes no particular significance. This is not entirely true, and here again is to turn to the history of Peru, or rather, the great empire of the Incas.

Before the arrival of the Spaniards in these lands played a vicunaan important role in the economic life of the Incas. The animal was domesticated by the ancient Incas, there were huge herds. Fur animals are actively used for making clothes, textiles, household. Those who came uninvited guests began the mass extermination of the animals, their number has decreased dramatically and the price of wool has increased many times over.

The appearance on the vicuna coat of arms - not the only wayshow the importance of an animal for the country, but also to remind people about the great stories. The same applies to the cinchona tree, the most prominent representative of the local flora, which played a role in planetary scale. It is known that the leaves of this tree produces quinine, one of the main agents in the fight against malaria.

Above the shield is a symbol of winners - baywreath. Left and right of the shield is decorated with Peruvian flags. Therefore, when the emblem appears on the flag of the country that there was no repetition of symbols, banners replaced with green branches, which are tied with a ribbon, painted in the national colors.

A trip to the Dominican Republic

The capital of Brunei: map, photo. What is the capital city in ...