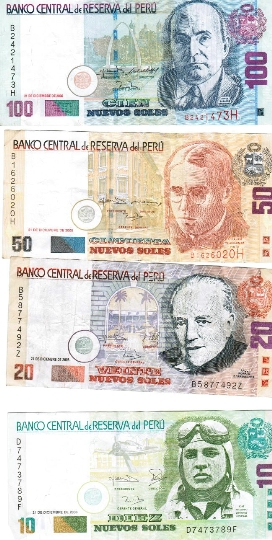 In Peru, the American republic, usedcurrency - Peruvian Nuevo Sol. One Peruvian salt is equal to 100 cents. The official abbreviation is the Peruvian Sol - PEN. The first Peruvian salt was introduced into circulation in Peru beginning in 1863 and was used till 1985, when he was still called silver salt, and from 1930 to 1985, it was renamed the Golden salt. The name comes from the Spanish coins «sueldo», which translated from Spanish means the sun. Sun - one of the main symbols of the city notable Peru. In 1985, the government of Peru, due to high inflation, have been forced to reform the monetary exchange, eventually led to the introduction of a new currency unit "inti", which is exchanged for old salts currency in relation to the 1000 1. However, currency inti also could not avoid inflation, and it suffered the same take into account. Peruvian Nuevo Sol - As a result, from July 1993, a new currency was put into circulation. To date, the money in Peru address in the form of banknotes in denominations of 10,20,50,100 and 200 Peruvian salts, as well as coins in denominations of 0.10,0.20, 0.50,1, 2 and 5 of salts.
You do not need a long time to think over the question "what currency should I bring?", As in Peru, in addition to the official currency, the dollar has broad application, which is an alternative currency in Peru.

Currency exchange is performed at almost every cornerthe city - in shopping malls, hotels, banks and numerous exchange offices. The most favorable exchange rate made - in exchange offices. In exchange, it is desirable to get your hands on a small bills, as a large denomination bills can be a problem, not all will be able to fight back. Exchange of other foreign currencies is carried out exclusively with the central banks in Lima and Cusco. ATMs in Peru, as in all other countries, are ubiquitous.
Payment with credit cards taken awaynot everywhere, mostly bank card you can use in the city center and in some tourist areas in remote areas is rare to find an ATM, so it's worth to yourself to have cash. You should know that is almost impossible to pay off credit card in the province. Peru is one of the few republics, where, duties restrictions on imports and export of currency is not provided. In the reverse exchange of Peruvian salt in rubles, dollars or euros, you must provide a check of the produced initial conversion of the currency.

Where better to relax in the suburbs. Where to go ...