Home>Articles about Peru>Peru Flag photo, history, meaning of colors of the national flag of Peru

Peru Flag photo, history, meaning of colors of the national flag of Peru 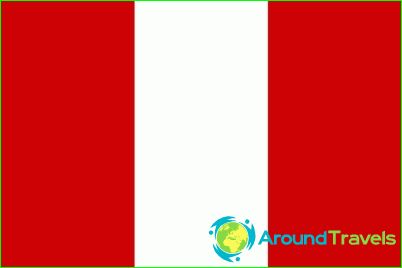 Every year on June 7th, the Day of the State Flag of Peru, which is one of the most important symbols of the country.

Description and proportions of the flag of Peru

Flag of the Republic of Peru is arectangle whose width corresponds to the length in a ratio of 2: 3. The flag is made by three vertical stripes of equal width. In the center of the flag is a white stripe, and the edges - a bright red. In the middle of the white field at an equal distance from the edges of the image is applied to one of the variants of the State Emblem of the Republic of Peru.
Red flag stripes symbolize the colorthe blood of the brave defenders of state sovereignty, and the white field reminds us of the dignity of the population. White color for Peruvians - it is also a desire for peace and the pursuit of progress and development.
Emblem Option decorating flag of Peru - isheraldic shield with the image of the vicuña on a blue field, and cinchona on white. These are the main characters of Peruvian flora and fauna. The lower part of the shield given cornucopia, whose image on the arms talks about endless natural resources and wealth of the country. Cornucopia is made of gold color on a bright red background. Laurel wreath above the shield - is the immortal glory which covered themselves with Peruvian freedom fighters and defenders of the motherland. Around the shield is a green branch, which intercepted the tape repeating colors of the flag - red and white.

The history of the flag of Peru

Flag of the Republic of Peru was coined in 1820. That's when the country came José de San Martín. This general led the war of independence in Latin America from the colonial yoke of Spain. General José de San Martín was the first head of the Peruvian government.
Seeing flamingos on the lakes of the Peruvian General proposed to select red and white as the colors for the iconic Peruvian Legion, because they reminded him of a combination of colors on the wings of flamingos.
In February 1825 Peru flag without the emblem adoptedofficially. In 1838, the country's coat of arms appeared on the white flag field, and a state symbol was passed again. Today, both versions of the Peruvian flag in the country are equal. Peru Flag with coat of arms made to raise public holidays. He took his place on flagpoles of all state institutions, including education. The second version of the flag - less official.