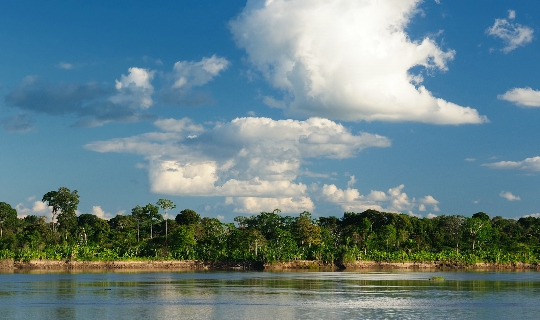 The majority of Peruvian rivers belong to the basin of the largest river in the world - the Amazon.

Javari - one from rivers located in the centralpart of South America. Geographically riverbed belongs to two countries - Peru and Brazil. The total channel length - 1056 km. Javari runs along the north-western part of Brazil, and is a right tributary of the Amazon.

The source of the river is located on the slopes of the Peruvian Andes (La Montaña town). Then it comes down from the mountains, and for the remainder of the flow is a natural border between Brazil and Peru.

The river is navigable for 500 kilometers upstream from the mouth. During the rainy season, which lasts from January to May, the navigable length of the interval increases.

Giroux - one of the many right tributaries of the Amazon. The total length of the river - 3280 km. Source - a place of La Monte (Peru), located in the foothills of the Peruvian Andes.

The river is navigable for 1,823 km from the confluence (to the municipality of Cruzeiro do Sul DKU). The basin is populated, but mostly in the middle of the river.

Curaray - one of the South American rivers, located in the territory of the two countries - Ecuador and Peru. It is the right tributary of the Napo River. The source of the river - the eastern foothills of the Andes.

The total length of the channel - 800 kilometers. And it passes through the territory of Pastaza (Ecuador province) and Loreto (Peru region). In Peru runs 414 kilometers. Curaray full-flowing throughout the year, but is navigable only in the lower reaches. River channel runs through sparsely populated areas. On the banks of the river live mostly Indian peoples - Quechua and Huaorani people.

Madrededios passes through the territory of the two countries - Peru and Bolivia - and refers to the Amazon basin. The total length of the river bed - 640 kilometers.
The source of the river is located in the Peruvian Andes.

Madre de Dios Region - one of the main water arteries, located in the upper reaches of the Amazon. On the bank of the river is a major port city - Puerto Maldonado. After him, the river is navigable.

River Valley is actively used for cultivationmango. In addition, there are mined gold, as well as logging on an industrial scale. On the banks of the river there are several protected areas.

The bed of the river is entirely in Peruand has a length of 724 kilometers. Mantaro is a duct Apurimac River. Geographically it passes through the lands of the following provinces: Junín; Yauli; Houck; Concepcion; Huancayo.

Kitchen Jamaica: photos, dishes and recipes of the national ...