Home>Articles on Philippines>Philippines Flag photo, history, meaning of colors of the state flag of the Philippines

Philippines Flag photo, history, meaning of colors of the state flag of the Philippines

Flag of the Philippines 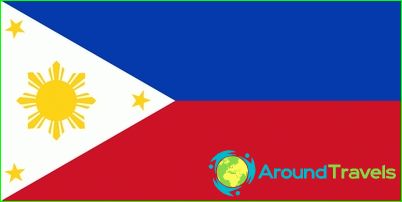 State symbols of the Republic of the Philippines, its national flag was officially adopted in 1898.

Description and proportions of the flag of the Philippines

Flag of the Philippines is a rectanglewhose width is two times shorter than the length. Flag horizontally divided into two equal parts of width. In peacetime, the lower part is bright red, and the top is made blue. During the war, the Philippine government changes the direction of the flag, and the top is a red field.
From the shaft deep into the Philippine flag juts whitecolor of an isosceles triangle, the corners of which are applied to three gold five-pointed star. In the center of the triangle is represented by a golden sun with eight rays, remote from each other at equal distances.
The sun is a symbol of freedom, and its raysreminiscent of the eight provinces of the Philippines, who first began the war of liberation from colonial Spanish domination. Three gold stars - this island archipelagos, which are part of the Philippines.
The white color of the triangle on the flag of the Philippines - ispurity and peace sought by the people of this country all their sincere thoughts. Siniee flag field is reminiscent of this Filipino patriotism and the red part of it - on their inexhaustible courage.
Navy Flag of the Philippines - a blue rectangle with three yellow stars, located in near to the shaft corners and in the middle of the free edge. The center is decorated with cloth of gold sun with eight rays.

History of the Philippines flag

Numerous conquerors and colonizersThey left their mark not only in the economy and culture of the country, but also in its state symbols. First rule over these lands are approved for Spain, and oblique burgundy red cross on a white flag raised in its overseas possessions, served as the flag and the Philippines in the XVI - XVIII centuries.
Then in 1762 the country became brieflysubmit to the British Empire, and on ships masts and flags on the houses soared by Her Majesty. Then the flags of Spain returned, and only during the national liberation revolution in the late XIX century secret society Katipunan come up with their characters. In those years, the Philippine flag is a red rectangle with the image of the eight-sun at its very center. The logo was applied to white.
While in exile, the leader of a secret society EmilioAguinaldo drafted a Philippine flag, which first supported the patriots in the Battle of May 28, 1898, and today is the official symbol of the island Asian state.

Photo of the Philippines flag