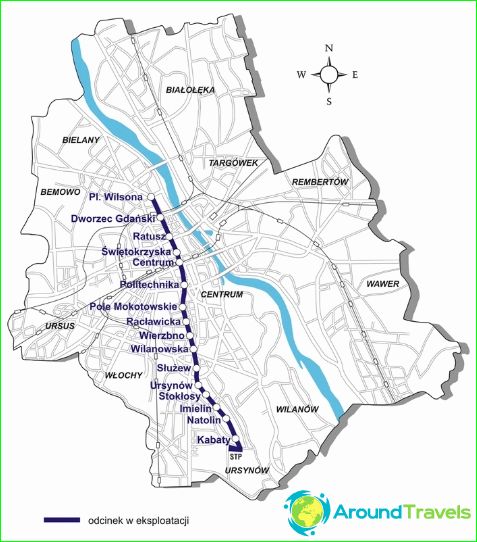 Metro map of Warsaw
Warsaw metro is currently composed ofone branch from north to south, which links central Warsaw with its densely populated northern and southern suburbs. The first section of Warsaw Metro was opened in 1995, and the line gradually expanded until it reached the planned length by October 2008. The future plans of the city authorities to expand and build a subway station, the construction of which had previously been postponed for reasons of economy.
In 2009, the Warsaw Metro won two awards: "In relation to the environment" and "The best maintenance program." In addition, the Warsaw metro is well known for its beautifully decorated stations (for example: from the station to the S1odowiec M1ociny, Plac Wilsona or Ratusz-Arsenal)
Plans for the construction of the underground systemrailway transport occurred in 1918, when the idea was first put forward in the days when Warsaw regained its status as the capital of Poland. Underground, as expected, it had to solve the traffic problems densely built-up city center. The Great Depression buried those plans - Poland and the world was experiencing economic difficulties. In 1934, with the election of the new mayor of Warsaw, Stefan Starzinski began new work on the project of the Warsaw Metro - construction scheduled to begin in late 1930. In total, over 35 years have 7 lines have been built. Work began in 1938, but World War II put an end to the ambitious undertakings. Short Stretches, made in 1938, today serve as wine cellars.
Warsaw suffered greatly during World War IIWar. And although the majority of the pre-war projects have been forgotten, Polish engineers who survived the war, returned to their city to take part in its revival. However, the new communist authorities of Poland have seen the future of the city in their own way. In 1950, at the height of the Cold War, Soviet strategic plans provide for the establishment of a secure transport link across the Vistula River. One way to achieve this goal was the creation of a deep (up to 46m below ground) underground in Warsaw, which will be interconnected with the railway network and can serve as an underground tunnel to transport troops.
Construction work began almostsimultaneously 17 different points on each side of the river. By 1953, only 771 were built subway tunnel, but after the death of Joseph Stalin, all works were stopped under the pretext of technical difficulties.
In 1984, a new programsubway construction, which was approved by the government and the first tunnels were built. Lack of funds, poor planning and rampant bureaucracy led to the fact that the work was carried out very slowly, at a rate of no more than 2 meters per day. Yet in 1995, the Warsaw metro with 11 stations were opened. Now the line has 21 stations and a length of about 20 kilometers.
Perhaps the Warsaw Metro - the onlysubway in the world, where tickets are not sold most of the transport company, and are available in post offices and in private shops and kiosks. However, in this case, tickets are valid for all modes of transport, including the metro, buses, trams and some commuter trains. In addition to tickets for one trip or a few days, you can buy travel cards for a long time, it is a budget alternative to the single ticket. The turnstile in the subway in Warsaw is not, so the ticket should be composted on their own.

Holidays in Morocco in January: the prices and ...