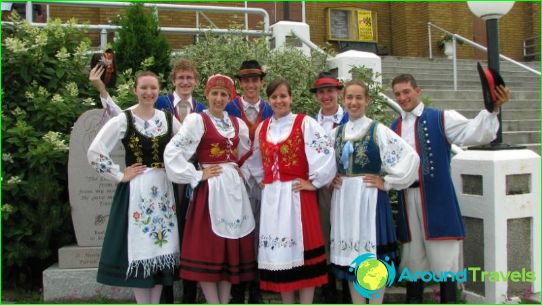 The population of Poland is more than 38 million people.
National composition:
- Poles (97%);
- Ukrainians, Germans, Belarusians, Lithuanians, Roma and other nations (3%).
High mono-ethnicity in Poland - resultshistorical events that occurred in the middle of the XX century (World War II and post-war period): at this time there was a mass movement of the Germans, Poles and Ukrainians, which led to changes in the ethnic composition of the state.
Over the past few decades in PolandIt arrived a large number of immigrants, with the exception of refugees from Chechnya. But the refugees in Poland do not pay benefits, and they are forbidden to engage in employment, the purpose of which is to obtain earnings. Therefore, Poland for them - a transit country.
On average 1 km2 is home to 123 people, but the most densely populated southern part of Poland.
The official language is Polish, but widespread is English, and the staff in hotels and shops also owns Russian language.
Big cities: Warsaw, Krakow, Lodz, Wroclaw, Poznan, Szczecin, Lublin.
Most of the inhabitants of Poland profess Catholicism, but the country can meet the Jews, the Orthodox and Lutheran representatives.

Men on average live to 71 years, and women - 80 years.
It is believed that the higher the governmentallocates funds for health care and medicine, the higher life expectancy. But high levels of Poland's population does not justify this postulate - Government expenditures on this article highlights just $ 1,300, while in the US - $ 8000, and the countries of Western Europe - about $ 5,000.
Poles cherish their health - theysmoking 2 times less than the Bulgarians, Greeks, Russians, Serbs, and the obesity rate in Poland is 15.8% (the average in Europe - 18% in the US - 36%, and in Mexico - 40%). In addition, the Poles are supporters of a healthy diet.

Traditions and customs of the inhabitants of Poland

Poles like to spend a fun celebration,in particular, to participate in theatrical performances ( "yaselkah"), which they put on evangelical plots (such events are held after Christmas) - go to the villages entertainers, which jest and singing carols: they go home and cheer the hosts. And as a "fee" they take refreshments with a festive table or a little money.
Season balls and masquerades starts on December 31 - the noisy celebrations are accompanied by excessive entertainment with dances, songs, jokes and abundant refreshments.
If you are thinking in Poland, keep in mind that:
- A visit to the Poles to go on an empty stomach: they are abundant and nourishing treat their guests;
- If you're a non-drinker person visiting Poles, at the table, you will have to defend its position;
- Poland decided to give public transport a place for women and elderly people in order to show respect.

Christmas in the Czech Republic, traditions, photo. As the ...

Airport Arkhangelsk: diagram photo. How to get ...