The history of Lisbon. The base development, occurrence of Lisbon 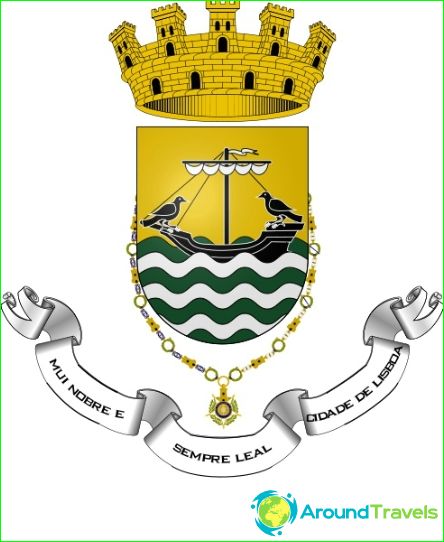 Lisbon - Portugal's capital and main port,also the most western capital of continental Europe. The city is located on the west coast of the Iberian Peninsula in the picturesque bay of the Mar da Paglia, which is the largest peninsula of the river estuary - Tagus.

And though the first settlement at the mouth of the River Tagusexisted in the Neolithic era, the exact date of foundation is unknown Lisbon. According to one version, about 1200 BC in a comfortable well-protected natural harbor settled by the Phoenicians. Some historians suggest that the Phoenician trading port located in the center of the modern Lisbon on the southern slope of the Castle Hill and was named Allis Ubbo. However, reliable data to support this version has not been found, and it is likely that the settlement was established indigenous people of the peninsula, to maintain active trade relations with the Phoenicians. There is also a legend, that Lisbon was founded by the famous Ulysses.

In the 1st millennium BC Celts inhabited the region en masse, from which, as a result of inter-tribal marriages with the indigenous peoples of the peninsula, and there were so-called Celtiberians - the ancestors of modern Portuguese. In 8-7 centuries BC ancient Lisbon was already fairly large and prosperous settlement. In the writings of the Roman geographer Pomponius Mela Lisbon mentioned as Ulyssippo, and Pliny the Elder calls him Olisippo.

In the second half of the 2nd century Lisbon provedunder the control of the Romans, who named it Felicitas Julia. The city received special status and a number of privileges, which undoubtedly had a positive impact on its development and economic growth. In 27 BC Lisbon became part of the new Roman province of Lusitania. Romans thoroughly fortified the city and built a number of different facilities - a large theater, a forum, baths, churches, apartment buildings, etc. In the twilight of the Roman Empire, Lisbon is becoming one of the largest centers of Christianity.

After the collapse of the Roman Empire, Lisbonrepeatedly subjected to barbaric invasions of Sarmatians, Alans and Vandals, and later was occupied by the Visigoths Suevi and then, having received the name Ulishbuna. At the beginning of the 8th century Lisbon was conquered by the Moors, and for several centuries was dominated by an Islamic caliphate, became in the 11th century capital of the Taifa Lisbon. In 1147, during the Reconquista the town was conquered by crusaders led by Alfonso I the Great. In 1255 Lisbon became the capital of Portugal, and soon a large shopping center, providing a connection between Northern Europe and the Mediterranean.

In the 16th century, Lisbon has been the European centerTrade between Africa, India and the Far East, and later South America. In the 16-17 centuries in Lisbon and other Portuguese ground repeatedly claimed Spain, signed the so-called "Lisbon Treaty", thereby recognizing the independence of Portugal only in 1688.

In 1755, Lisbon, being at that time oneof the largest cities in Europe, a strong earthquake and the resulting tsunami was virtually destroyed. Rebuild the city managed by the end of the 18th century, but, unfortunately, many monuments of medieval architecture have been lost forever. From 1807 to 1811 the city was in the power of the army of Napoleon Bonaparte, with the result that has been thoroughly looted.

In the 20th century, Lisbon became the scene of three"Portuguese revolutions", the last of which ended in a bloodless military coup in April 1974, thus ending the autocratic regime and gave a rapid revolution in the development of "new" democratic state.

In 1994, Lisbon was declared a culturalcapital of Europe and is today one of the most popular tourist destinations, as well as economic, political cultural center of Portugal.

Rest in Belarus in December: the prices and ...