Braga 3 days: where to go in Braga 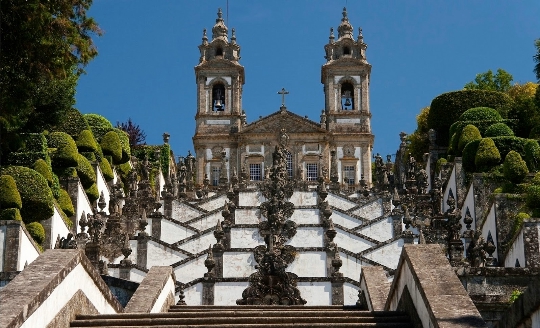 One of the oldest cities in Portugal, Bragaproud of its history. It has more than 2200 years, and in the number of informal titles listed Braga - "City of the Archbishops". Churches and museums, university and rich cultural traditions make a visit here a rich and interesting. Braga 3 days - an excellent program visit the ancient city, in which you can manage to see all the most important and interesting.

The history of these places all in one way or another connected withreligion. Diocese of Braga is one of the oldest in Europe, and the city has long been a center for the spread of Christianity in the Pyrenees. In the XI century in the city of the construction of the Cathedral, which became the core of the old Braga was started and one of the most important monuments of modern Portugal. The temple is dedicated to the Blessed Virgin Mary, and his appearance Braga was awarded the title of the archdiocese of the capital.
In addition to the main cathedral in Braga for 3 days, you can have time to visit other churches:

If you have the opportunity to stay in Braga3 days, to visit another unique attraction, located six kilometers from the city. Cathedral of Christ on Calvary is famous road leading to it. Fountains and chapels reminiscent of the stops that made the Savior of the ascent to the cross. Zig-zag stairs and gardens, broken on either side of it, there are already six centuries and represent the last steps of Jesus.

Braga 3 days and allow you to see the mostmajor museum exhibitions. For example, open the means of well-known patron of the Portuguese Museum Nogueira da Silva gathered under one roof at the University of Minho rich collection of not only paintings and icons, but also ancient archaeological finds, ceramics and even antique furniture.
No less interesting are the exhibits of the Museum of Pius XII,bearing the name of the Pope. Its exposition is dedicated to the ancient Braga and archaeologists found artifacts of Paleolithic and Bronze Ages. The nearby museum tells about the work of the famous Portuguese artist Enrique Medina. More than twenty of his original works are the basis for the exposition of the museum of the same name Braga.