Home>Articles about Romania>Romania Flag photo, history, the value of the state flag colors of Romania

Romania Flag photo, history, the value of the state flag colors of Romania 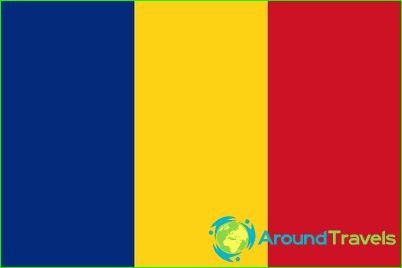 One of the main symbols of the state, Romania,national flag is the tricolor flag in the shape of a rectangle. The aspect ratio of - 2: 3, and the bands are of equal width. At the base of the flagpole and the flag is the band in dark blue, center - bright yellow, and scarlet cloth strip closes.

For the first time the colors represented on the flag of Romania,appear in public attributes during the reign of Michael the Brave. At the end of the XVI century, the ruler of the rules of the Moldavian principality, and Wallachia, which is located on the territory of modern Romania. Historians, however, believe that even a century earlier blue, red and gold colors were used in court as flowers at the Ruler of Moldova Stephen the Great.

In 1821, Tudor Vladimirescu ledWallachian uprising, whose aim was the overthrow of Turkish rule and the liberation of the Balkan peoples in the Principalities. He managed to be a few months to capture the ruler of Wallachia and Bucharest. His symbol of the rebels declared the tricolor, waving on the flagpoles in their military camps. Blue, yellow and red led soldiers into battle and symbolized courage, unity and freedom from oppressors.

State flag of Romania has existed inunchanged until 1948, when it was additionally applied coat of arms of the Socialist Republic of Romania, formed after the victory over the Nazis. Until the revolutionary events in Romania, took place in December 1989, the public image of the character has changed slightly: the coat of arms added a star above the sheaf and weave a landscape within a wreath.

Revolutionary changes were made and the flag. Emblem of it just cut out, and the media of various countries showed viewers and readers some kind of eerie Romanian flag with a perforated cloth. December 27 after the revolution, the restoration tricolor was enshrined in law without the coat of arms of Romania as a state flag.

With a national symbol of the country is linked interestingfact. Residents of the village Klinchechi working at a local factory, woven biggest flag in the world, with an area of ​​80 thousand square meters. Its weight was equal to five tons, and the manufacture took nearly 70 km fiber. Flag giant took pride of place in the Guinness Book of Records, and to secure the achievement of two hundred residents of the village for a few hours unfurled a huge banner on the ground.