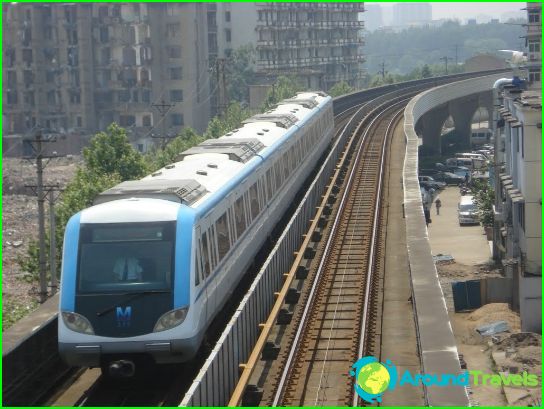 Romanian capital Metro began its work inNovember 1979. Today, it comprises four working lines in which more than 50 open for entrance stations and direct exit of passengers. The average distance between stations is approximately one and a half kilometers. The total length of all routes of Bucharest metro - almost 70 kilometers, and its passengers daily are at least 500 thousand people. Annual passenger traffic on the subway in Bucharest rose to 170 million per year.

Each of the four routes of Bucharest Metro hascolor marking on a map and an alphanumeric designation. The very first put into operation the line has become a "yellow" M1 branch. It is shaped like a closed loop and passes under the central part of cities. On it you can get to the Gare du Nord, where to make the transition to "green" the M4 line, put into operation last in 2000. She still has a few stations and reaches the north-western areas of the city sleeps.

The blue color on the metro map of Bucharest designatedM2 branch. She was commissioned in 1986 and tied the northernmost outskirts of the Romanian capital with the south and south-east. In the "blue" branch operates 14 stations. It is related to transitions from the "red" and "yellow" lines.

Route red began its work in 1983year. This branch is open 15 stations, four of them can move on to other lines of the Bucharest metro. In 2011, builders have started laying the fifth route Bucharest subway, which will initially have a length of about seven kilometers. fifth line will open 10 service stations for the first phase of the passengers.