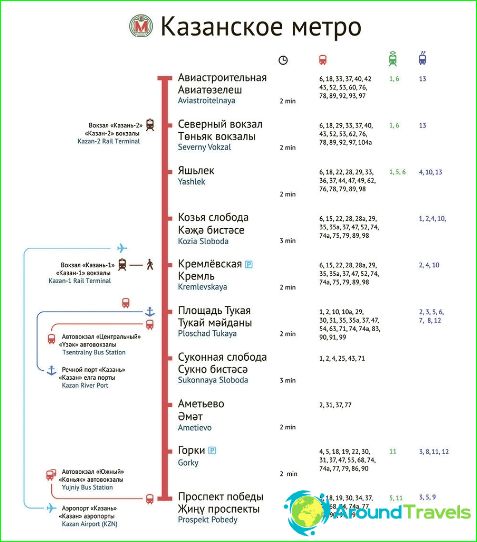 Metro in Kazan was opened August 27, 2005. Its opening was timed to the celebration of Kazan Millennium. Kazan metro - the seventh in Russia.

Despite the fact that the first construction projectsrail transport in the city were discussed even on the eve of the Great Patriotic War and in the postwar years, due to the growth of the peripheral buildings, there is a real need for new public transport areas, until 1979 the creation of the subway in the capital of Tatarstan authorities of the country seriously discussed. The reason was that the metro construction plans could only refer to cities with a population of more than a million inhabitants.

Due to the economic and political crisis,broke out in the country, the preparatory work, which began in 1983, have been postponed. However, the government of Tatarstan for 13 years did not give up ambitious plans. As a result, only in 1996 the decision to establish the Kazan underground was accepted and construction began in 1997.

After opening August 27, 2005 Kazan metro, consisting of 5 stations on the same line, in a short time reached the passenger traffic of 11 million. Passengers per year.

In Kazan metro posted information signs in the Tatar and Russian languages. Advertisements in trains are given in three languages ​​- English added.

Metropolitan Kazan serves passengers from 6:00 to 24:00. Interval of trains during peak hours of 5-6 minutes. Time of movement between the end stations 22 minutes.


The fare on the subway Kazan

Pay for travel on the subway, you can useSmart tokens that are valid for a month, to replenish contactless smart cards and transportation cards for multiple trips. Metro passengers are entitled to free transportation with a child not older than 7 years.

UAE Flag photo, history, the value of the state flowers ...