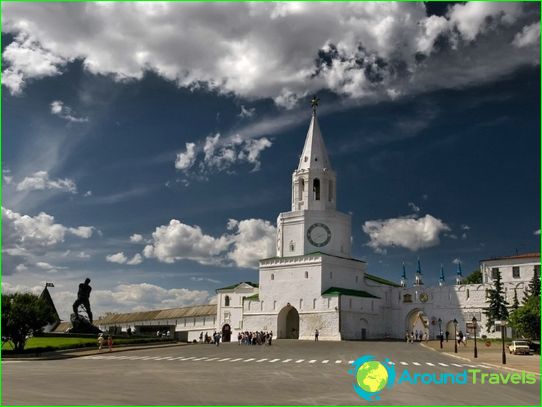 Somehow, the leaning tower of Pisa is famousthe whole world, but of the leaning tower of Kazan know not all. In Tatarstan, they are very fond of this symbol of the city - tower Syuyumbike, also consider it mysterious. And it's not just that she falls, but it is not possible to find out for certain buildings age, as well as to confirm or refute several conflicting legends associated both with the tower and with the personality of Queen Syuyumbike. And to better understand this, it is worth visiting the tour in Kazan - the capital of the Republic of Tatarstan.

However, in Kazan, which not so long agofulfilled 1,000 years, there are still many other attractions. According to their level of Kazan differs little from Moscow or St. Petersburg. In addition, the city has been thoroughly given in order for the anniversary. Many historical buildings and monuments was ennobled or restored. Coupled with this were built and new buildings. For residents and visitors to the city opened its doors to trade, cultural and entertainment centers, moreover, they are consistent with international standards. Updated Kazan has become more beautiful, adding to its usual Muslim-Orthodox appearance and more European features. However, the Tatar capital city has not lost its uniqueness.

Serene afternoon well visit the sightseeing tours in Kazan. They can get acquainted with a number of attractions:

The capital of Tatarstan is relatively wellpreserved historical center of the building, as well as the Old Tatar settlement, which have architectural value. In these places you can see the old merchants' mansions. Emphasis is placed on apartment houses belonging to XVIII-XIX centuries. This is the legendary "House of Shamil", as well as houses and Kekin Mikhlyaev, Solomin, Smolin and Usmanov. There are other, no less interesting old buildings. And for the anniversary of the capital city was reconstructed and recreated many objects of cultural and historical environment. A striking example is the Kul-Sharif Mosque, located on the territory of the Kazan Kremlin.

Separately, it must be said about "Kazan Arbat". So here is called Bauman street, where a lot of unusual sculptures focused, next to which is usually photographed by tourists. One of these masterpieces - a monument to the legendary cat Alabrysu, whose descendants still consider whiskered and fluffy guardians of the relics of the St. Petersburg Hermitage. In fact, it was not a cat, and as many as 30, and they were discharged from Kazan to St Petersburg Elizabeth. It happened after the Empress visited Kazan and drew attention to the absence thereof, in the mice.