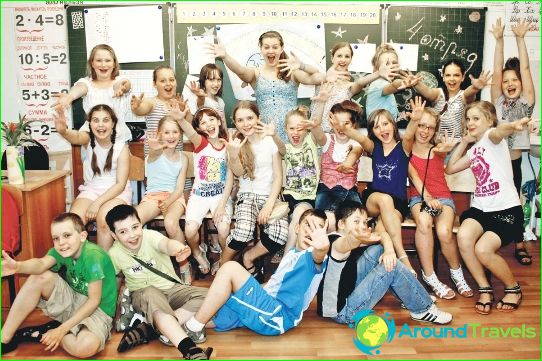 On the territory of the Tyumen region employs more than 650 children's sanatoriums and camps. Among them are the following institutions:

In Tyumen camps, mostly children from the restTyumen region. Many of the camps are located near the river, surrounded by pure nature. Activities health camps take place in accordance with the development plans, which include training activities, improvement of the material base, the introduction of new forms of recreation.

What is the difference Tyumen camp

Children's camps in Tyumen characterized by developedinfrastructure. They are organized at a high level of cultural and leisure, recreational and sports activities. All the buildings in the camps meet the standards. There are residential buildings, medical units, gyms and canteens. Some camps are actively introducing new technologies. This allows them to continually inform parents about how their children are resting. It uses the power of the Internet.

Many camps and centers have their own websites, where theypublish information on current events. "Young Geologist" The unique project is presented in the camp. On its site recreation for children is broadcast online via webcams.

When you can go to summer camp

Tyumen - the administrative center,located in West Siberia. In the city environment is not favorable. So it's best to purchase tickets to the camp, located outside the city limits. Questions of the organization of children's rest in the Tyumen region is engaged in a special service. Its main task - to provide children with vouchers to health countryside camp. Over the past few years, more than 170 thousand children were able to relax in the health camps Tyumen.

Children's health centers inviteholidaymakers all year round, not just during the summer. The permit can be purchased in the fall, spring and winter holidays. Children's holiday in the Tyumen region was under control of the authorities. Much attention is paid to the safety of children. camp organizers necessarily require insurance from parents of children who are going on vacation. Before the trip, the child should see a doctor in a children's clinic. center staff undergo periodic medical check-ups.

Children's camps in Tyumen introduce new technologiesand make progressive relaxation program. In addition to health treatments and sporting activities, children attend excursions to the famous places of the city and the region. - Tyumen is the largest center of the Siberian region. On its territory there are so many museums that are of interest to students.

Photos of children's camps in Tyumen