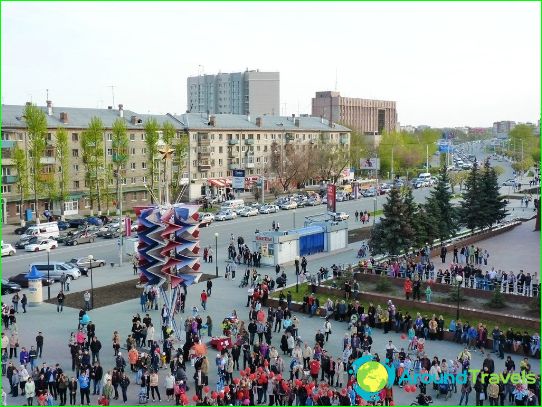 Tyumen - one of the most interesting Russian cities in Siberia. Excursions in Tyumen allow us to understand how Russia is multifaceted. So, what options are open to tourists?

During the city tour program can bevisit as well as on the streets today, and discover the marvelous historic center of one of the best cities in Siberia. Tourists will be able to see the old buildings, wonderful churches representing different wooden architecture and the unique carvings, visit the merchants' mansions, built in the XVIII - XIX centuries. Among the attractions that deserve attention, it should be noted Saviour Church, and Holy Trinity Monastery. Sightseeing tours in Tyumen always include a walk through the historic waterfront, which is unique because of the four levels. Special moments will be inspection of urban architecture from the Bridge of lovers, which is located on the Tura River.

The most unusual attractions in Tyumen

1. Museum of Geology, Oil and Gas.
You want to learn about the most importantexploration works, which were carried out in Siberia? Are you interested in particular oil and gas? In this case, take the opportunity to visit the Museum of Geology, Oil and Gas. It should be noted that the museum center attracts amazing exhibits, namely, rare minerals and precious minerals. Take the opportunity to see the exhibits telling about the development of the oil-bearing horizons of the Khanty-Mansiysk, and here you can see the paleontological excavations. Interested can and valuable medals, among which are "Honorary Oilman" and "Excellence in the oil industry." While visiting the museum you can see the uniforms of geologists. The Museum Center hosts important events are regularly devoted to modern geology, oil and gas. Hours: Wednesday to Sunday, from ten o'clock in the morning until six in the evening. Weekend days: Monday and Tuesday.

2. Museum "House Masharova".
The museum "House Masharova" is located in a smallfamily house, built in the "neo-classical" style. This building formerly belonged to ND Masharova, which is known as one of the most talented industrialists Tyumen. Take the opportunity to visit the office of one of the most influential businessmen of Tyumen. Employees of the museum center offers the children to look at the dolls, visit the etiquette lesson, take part in a music concert. For visitors to the exposition, representing the family life of the late XIX century. For a ticket you need to pay only 25 rubles, the tour will cost 200 rubles.

3. Square Siberian cats.
You want to stroll through the most unusual alleyTyumen? You are able to use this opportunity, if you will walk on the square of Siberian cats. Until 2008, the alley was nameless, it housed ordinary trees. Now you can see in the park beautiful gilded statues of cats. The appearance of unusual park is connected with a long history. In the siege of Leningrad in the city there are many rats. City managed to keep thanks to Irkutsk, Omsk and Tyumen cats. In Leningrad brought about five thousand cats, so the problem has been successfully resolved. In memory of this event in Tyumen created Square Siberian cats.

Tyumen - unusual city, Russia that will open for you in a new way.

Holidays in Latvia in December: the prices and ...