Articles about St. Petersburg
by aroundtravels 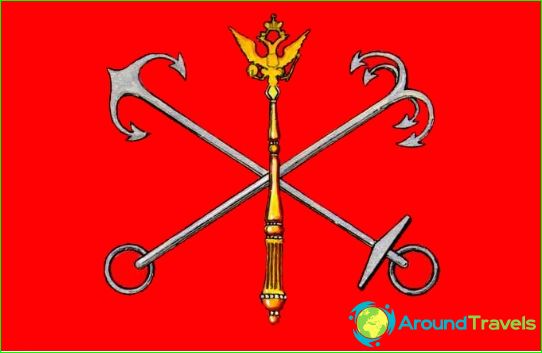 Russian northern capital, St. Petersburg, as is common, has its own official symbols: flag, anthem and coat of arms.

Description and proportions of the flag of Saint-Petersburg

Flag of Saint Petersburg - a rectangularcloth, which the parties relate to each other in a ratio of 2: 3. flag field is made in red. In the center is the emblem of the city, consisting of two crossed anchors and a scepter with a double-headed eagle. The prototype of the coat of arms depicted on the flag, coat of arms served as the Vatican - the city of St. Peter.
One of the anchors on the Flag of Saint Petersburg -sea, and the second - the river. It symbolizes the union of the two ports of the northern capital. Sceptre with the double-headed eagle recalls the great power traditions of the city, the former capital of the Russian Empire, and serves as a symbol of imperial power.
Flag Color handed mixing colors red lead and cinnabar. Images anchors made white with gray penumbra, and the scepter and crown - gold.

Officially, St. Petersburg flag in hiscurrent form was adopted June 8, 1992. It contributed to the Heraldic register and assigned a registration number 49. It happened after more than half of the inhabitants of the northern capital positively expressed in the referendum for the return of the city historical name in 1991.
There were earlier draft of the flag, one of thewhich is an exact copy of the Russian tricolor in the upper right corner is near the flagpole golden image of a ship from the spire of the Admiralty was applied. It admiralty ship is one of the visiting cards of the city on the Neva, and his picture adorns a lot of cards and brochures with views of St. Petersburg.
Images of anchors on today's flag - a tributethe fact that the northern capital is one of the largest in the country and in Europe seaports. Of great importance in the economy of the city and the region plays and river port of St. Petersburg.
The image of the scepter and the crown - this Sovereignthe power of the city, its historical and cultural heritage, military glory. In the northern capital collected unique works of art, and its archaeological sites protected by UNESCO as an invaluable heritage of mankind.
In some existed for several yearsdiscrepancies with respect to the proportions of the flag of the parties, but in 2012 legislated ratio of the flag length to width ratio of 3: 2, and the contradiction was eliminated.

Unreliable representatives of the tourist market. How to recognize them ...