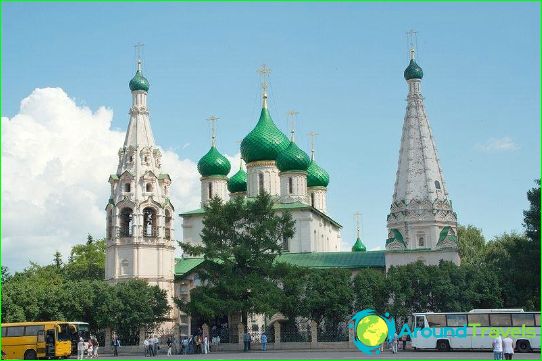 Yaroslavl - an ancient Russian city, allowingimagine what was Russia many centuries ago. The life of the local population tranquil pace. Not surprisingly, Yaroslavl is still one of the most important tourist points of the route called "Golden Ring of Russia". All tours in Yaroslavl assume familiarity with the numerous attractions.

It is important to note that the city is located about800 architectural monuments, which are under state protection. Five years ago, a famous event: the UNESCO historical center of Yaroslavl made in the list of World Heritage sites.

All sightseeing tours in Yaroslavl begin withexplore the city center. It is important to note that the area is listed as an example of urban planning policy of the XVIII century. Each tourist can see old churches and cathedrals, monasteries, as they are located throughout the city. From the outset, Yaroslavl makes a special impression, because it appears the old white-stone town with beautiful gardens and wonderfully pleasant aura.

Would you like to learn Russian and to better understand its history? In this case, plan a trip to Yaroslavl, it deserves your attention!

The capital of Ecuador: map, photo. What is the capital city in ...

Children's camps in Minsk in the summer. Children's ...