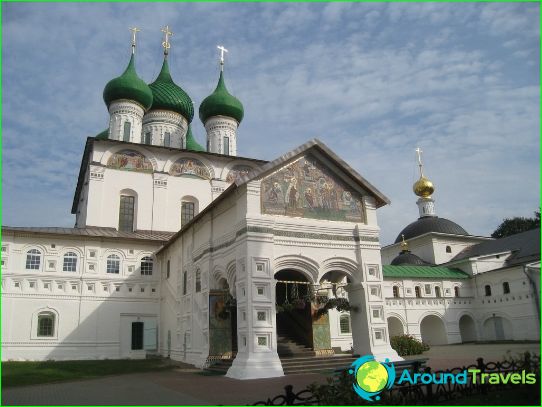 Founded in 1010, Yaroslavl - one ofthe oldest Russian cities. Due to the important historical and cultural value, Yaroslavl included in the famous tourist route of the Golden Ring, and its old center is protected by UNESCO and is on the World Heritage list. The tours in Yaroslavl you can go by train or by plane, bus or car. The most enjoyable way to be in the ancient Russian city in the summer - a cruise on the Volga River by boat.

Walk along the promenade

One of the most beautiful places in the city - EmbankmentVolga River. Squares and parks, historic buildings and monuments, gazebos and beds - on the waterfront are dozens of memorable places and structures. For fans of an active lifestyle on the banks of the Volga open rental and bicycle clips, and those who prefer water sports can ride on a jet ski or a boat.
Souvenirs during the trip is best to buy onpedestrian street in the center of the city of Kirov. It opened dozens of stores and centers of handicrafts, and the café "Actor" serves Russian cuisine, or have a cup of excellent coffee.