Home>Articles on Russia>Moscow Flag photo, history, the value of the flag colors of Moscow

Moscow Flag photo, history, the value of the flag colors of Moscow 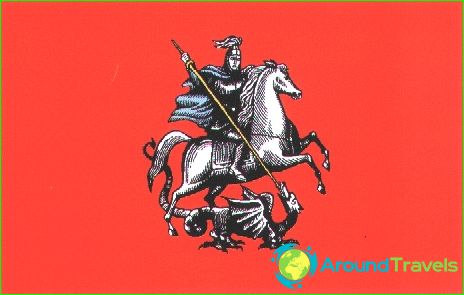 Interestingly, Moscow is considered the official flagurban banner and has public value. It was first approved in February and ninety-five, and even made a special Russian heraldic register having the registration number 197. The approval of the first flag was on the orders and under the supervision of the mayor of Moscow (the order was received by the ninety-fourth).

In its structure, this flag isrectangular panel, which has a red (scarlet even more) coloring. In the middle of the flag is the main figure of the Moscow coat of arms, that is, George, dressed in silver armor and azure dragged (the same mantle). This George is sitting on a silver horse and hit a spear of dark gold snake. The size is one third of the entire web width and indicators to the indicators relate to the length - two to three.

In winter, ninety-five was the decision ofcapital Duma under the twelfth number, according to the starting time of the law, describing the city's official coat of arms with a flag. It was here that was available for basic descriptions of what should be the flag. It was there confirmed that the flag has a dark red coloring, and is located in the middle of it (on both sides, by the way), the main figure of the Moscow coat of arms. This figure is set by the flagpole. General characteristics of the image width is approximately two-fifths of the overall performance of the length of the cloth.

But in the summer of 2003 became the law of the aboveinvalid as a result of the new law at number thirty-eight, too, describes the new Moscow flag. In this case, slightly changed the description of the banner of self. In particular, this flag is in its coloring remained dark red and has the same rectangular shape. width indicators correlated with indicators of length - two to three. Figure also remains bilateral and located in the heart. This, of course, comes to St. George, who sits on the horse and just kill the bad serpent with his spear. General characteristics of the image width is approximately two-fifths of the overall performance of the length of the cloth.