Children's camps in the Altai region 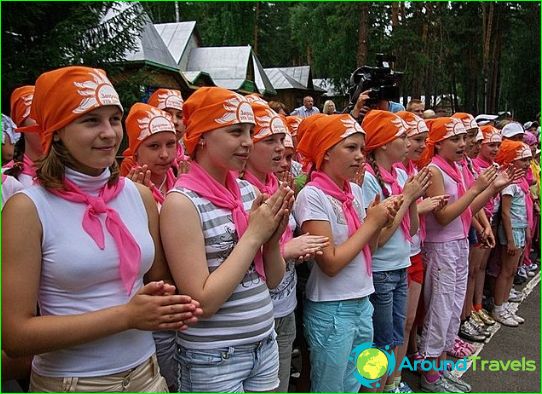 Altai region popular with tourists of all ages. Come here tourists from Russia and other countries. The region is full of places that attract fans of beautiful nature and outdoor enthusiasts. Interesting and scenic areas can see each - enough just to come to the Altai region. Children's holiday here is interesting and varied.

As you can relax in the Altai region

Guys come to health centers,resorts, theme camps and tourist bases. Altai is famous for its clean waters and forests. Many tourists tend to spend a vacation in the Altai Mountains, near the freshwater lake Aya. This warm lake - in summer the water temperature reaches 20 degrees it. Children vacationing in camps near the lake, happy to bathe in it. On the shore of the lake it is equipped with a great beach. Children's camps in the Altai region - this year more than 1,200 health institutions. Among them is a sanatorium camp, where they spent the treatments.

Each year in the province conducted healthcampaign, during which a quality vacation get more than 120 thousand children. The change in the usual camp lasts 21 days in the sanatorium - 24 days, and in the camp day stay - 18 days.

The organization of summer recreation for children the administration of the Altai Territory poses a major problem:

Summer holidays in the Altai camp - a masspositive impressions, interesting events, communication with peers, the opportunity to demonstrate their abilities. Each summer camp operates under the program. The main objectives of teachers: the moral, ecological, aesthetic and patriotic education of children. As part of the camp program held various events devoted significant dates.

For improving rest of children in the province havea lot of possibilities. Healing place is the city of Belokurikha. He became known as one of the best resorts in the world. These people come from different countries, to improve their health. Belokurikha air in many respects superior to the air of Davos in Switzerland. The resort operates a lot of resorts. Considering the trips to children's camps in the Altai Territory, the parents prefer to institutions located near Belokurikha. Equally popular are the camps, which are located in a special ecological zone, denoted "Turquoise Katun". Vacationers there is provided a range of services in the field of active recreation.

Photos of children's camps in the Altai region