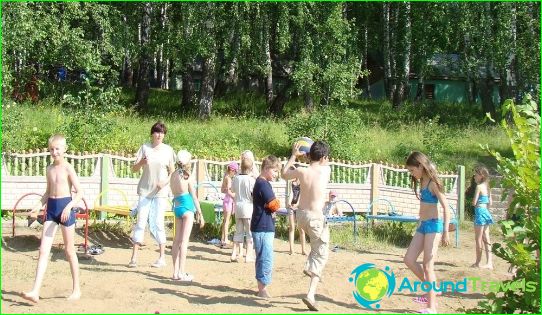 Kemerovo - an ancient city, which appearedin the 18th century and was formerly known as Goldfinches. Its present name was given only in the early 20th century. In Kemerovo many original monuments and several museums. Today, this city is a major industrial center in the eastern part of the country. Here, energy development, chemical industry and mechanical engineering. Therefore, the environmental situation in the Kemerovo poor. On vacation should leave the city in the area with pure nature.

Children's camps are located in ecologicallysafe areas. In the Kemerovo region a lot of recreational facilities, suburban camps and sanatoriums for children. It is a leader among the other subjects of the Siberian Federal District on the number of working children's camps. During the summer holidays in the region there are more than 900 camps. Almost every school in Kemerovo has a day care camp. Health and specialized institutions offer a variety of change for children. They organize tourist trips to the Western Sayan, Kuznetsk Alatau Mountain Shoria and other places.

Improving summer campaign - the resultjoint activities of cultural institutions, social protection, health and education. In suburban camps educational process takes place with the participation of experienced teachers and psychologists. Management has set itself the following objectives: strengthening the base camps for children, the development of health institutions network for students, ensuring the safety of children.

- Kemerovo is the administrative center of Kemerovoregion. For improving rest is better to choose camps and resorts are located outside the city limits. The city stretches along the banks of the Tom River, in the south-eastern part of Western Siberia. Between Kemerovo and Moscow 3482 km. The climate is continental. The city is very long winter with average temperatures of -22 degrees. Frost then reach -45 degrees and lower, and the snow lies meter snowdrifts. But the local population loves winter. In summer, the Kemerovo hot and humid. Summer is short, and the temperature sometimes reaches 40 degrees. Go for a swim in the local river, downstream of the city, it is not recommended, even in very hot weather. It is saturated with water in chemical wastes. The level of air pollution in the city too high.

Children's camp in Kemerovo focus away fromindustrial plants and areas with poor environment. In this regard, favorable conditions have developed in the mine area, which is located next to the pine forest. There are many lodges, resorts, camps and ski lodges.

Photos of children's camps in Kemerovo

Airport Tashkent: diagram photo. How to get ...