Children's camps in the Krasnoyarsk Territory 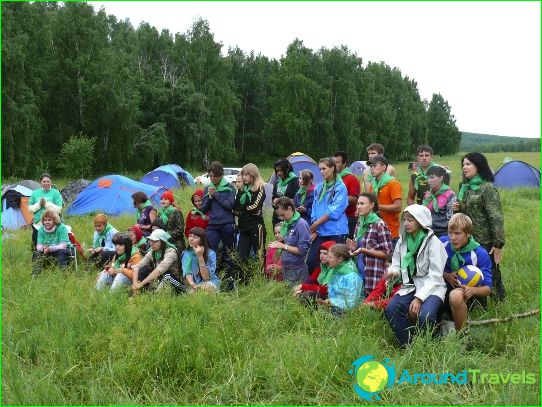 Krasnoyarsk region - a great place forchildren's activities. The local health camps created comfortable conditions for accommodation of children. In the Krasnoyarsk Territory has a unique cultural, historical and natural attractions. The effectiveness of children's activities increases every year thanks to the measures taken by the regional administration. The main purpose of such events - the largest coverage of the various forms of school holidays.

Features of the organization of children's camps

Children's camps in the Krasnoyarsk region - a 1294 recreation establishments. Among them there are about 1,200 day care camps, 65 country health institutions, 17 sanatorium-type camps, etc.

Krasnoyarsk Yenisei stretched in a swimming pool,Eastern Siberia. Lowland is located along the left bank of the Yenisei River and the Central Siberian Plateau - along the right. Almost 45% of the area covered with forests edge: taiga and deciduous forests. Yenisei River is considered the largest in the country, according to its pool area, it takes the second place among Russian rivers. Nature of the Krasnoyarsk Territory is striking in its beauty. Summer camps, motels and resorts are located in ecologically clean regions. Each agency takes a landscaped area in the green zone.

Parents can choose a ticket to the camp everyProfile: wellness, sports, language, camping, environmental, etc. To the child spent time with benefit, send it to the camp, where he studied foreign languages.. Krasnoyarsk Territory functioning institutions in which leisure is combined with the study of the English and German languages. For example, a non-profit educational organization "International Language School" camp annually to the study of languages. They begin to work with the arrival of summer. In addition to educational programs in these camps provided an extensive program of activities and entertainment.

Children's camps in the Krasnoyarsk region - isa variety of recreation programs. Normally, the program depends on the specifics of the institution. The list of activities includes entertainment competitions, sports, quizzes, excursions, trips and tours of the Krasnoyarsk sea. The region has a large number of nature reserves and natural sights that attract tourists. For example, the Krasnoyarsk Pillars, Museum of Permafrost in Igarka, Putoransky Tunguska and reserves and other. All of them are interesting to children and adults. The majestic nature of the Krasnoyarsk Territory amazes tourists with its northern beauty.

Photos of children's camps in the Krasnoyarsk Territory

The beaches of the Algarve: photos, videos. The best sandy beaches ...