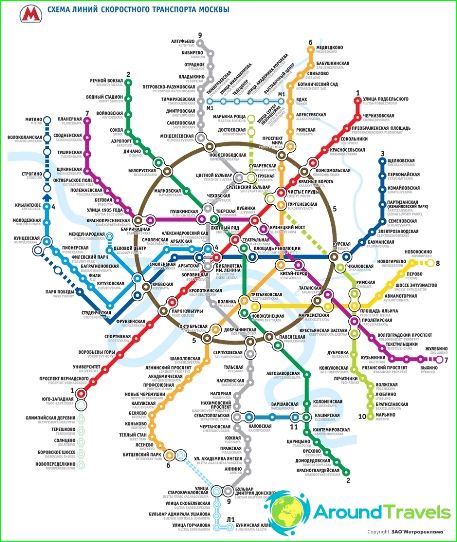 Metro in Moscow was opened May 15, 1935. For several decades, it is the main public transport of the capital, carrying out more than half of all passenger traffic. The scheme of the Moscow subway lines repeats historically formed radial-circular layout of the city. Thus, the subway connects the central part of the city with sleeping areas. Every year, the line extended and the number of stations increases. In March 2014 the Moscow Metro has 12 lines and 194 stations. The total length of the network - 325, 4 kilometers.

Average passenger traffic in Moscow metromore than 7 million passengers a day, periodically during the week he reaches 10 million. For this indicator, the Moscow Metro is the 5th largest in the world after the subways of Seoul, Beijing, Tokyo and Shanghai.


Key dates in the history of the underground

The first line of the Moscow metro was opened on May 151935. The line connected the station "Park Kultury" from "Sokolniki" station, and was diverted from the station "Okhonov number" to "Smolenskaya" stations. After two years, this branch has been extended to the "Kiev" station. A year later, in March 1938, it has operated two subway lines in Moscow - Kirovsk, Frunze (now the Sokolnicheskaya) and Arbat-Pokrovskaya.

During World War II workthe expansion of metro lines continued. And after the war, it was adopted a plan to create a ring route. The first section of the Circle Line was launched January 1, 1950. Train station followed by "Kursk" to "Park Kultury" station. Two years later, the passengers took a second portion in the other direction - from the "Kursk" station to "Belorusskaya" station. March 14, 1954 Moscow Metro Circle line was closed.

In December 2002, it was opened 164th subway station "Dmitry Donskoy Boulevard", which was the first subway station located outside the Moscow Ring Road.

At the end of December 2003 Butovskaya Line Skytrain was launched. And in November 2004 - the monorail transport system.

The Moscow Metro is open from 5.30 am to 1.00 o'clock in the morning. At different branches of the movement of trains begins at different times. Schedule beginning of the movement of each line indicated in the lobbies of stations. Average train speed - 42 km / h, the minimum headway of 1.5 minutes.


The fare on the subway in Moscow

Tickets for travel on the subway, and are sold at the box officemachines in front of the station. For many trips in the metro is wiser to purchase cards for multiple trips. Metro tickets are also valid on other forms of public transport in Moscow. Payment one trip allows passengers unlimited stay in the metro network to the exit of the tourniquets. To get to the station platform should be attached to the card validator turnstile, with the display of the turnstile display the remaining amount of the paid trips to the purchased card. Validity of the card and the number of trips can be checked on a separate validator near metro cash registers. For children up to seven years and retired in the Moscow Metro provided free transportation.

Holidays in Israel in October: prices and ...