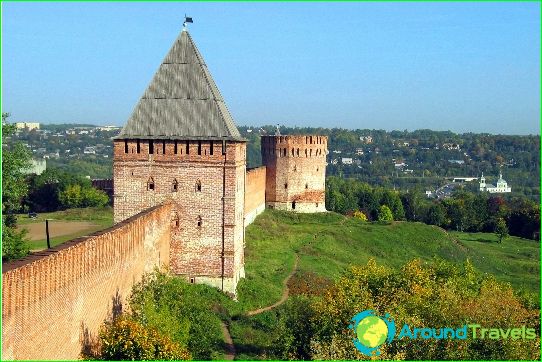 In Russia, a lot of cities that are dueunique ancient architecture, rich in history and events of ancient Russian churches have become popular tourist center. Excursions in Smolensk - one of the centers - provide familiarity with the amazing places of the city.

It will take many days to at least partiallylearn about the history of the city and the most famous places of Smolensk region. Almost all the interesting sightseeing tours Smolensk include visits to popular attractions at the travelers, which include:

The most famous attractions

All tours begin in Smolensk orend up in the same place - in the Smolensk fortress wall of the Kremlin, striking his great size. Not all the walls of the tower are of the view that they have been in the distant ancient times, many of them have not survived to our times. Guides like to talk about Kopytenskoy tower - one of the few that have the same form as when it was built.

Historians have not been able to explain the names of sometowers. But there is one tower that puzzles all, to hear her name - Veselukha. Scientists attribute this to the name of "fun", in other words, a beautiful view on the main river of the city - the Dnieper. Because of the six-meter width of the ramparts is sometimes compared to the famous Wall of China.

Of particular importance are the tour, includingvisit the Assumption Cathedral - the main temple of the city, managed to survive and the war and the period of the communist struggle against religion. Cathedral, known for its gilded iconostasis was built in the time of Vladimir Monomakh - Prince of Smolensk.

Thanks stored here three OrthodoxShrines and especially the icon of the Smolensk Mother of God church became known far beyond Smolensk. He attracted the attention of many Russian and foreign tourists, who come here not only to estimate its architectural splendor, but also for the worship of holy places and praying.

Like all ancient Russian city Smolensk alwaysdifferent religious and plenty of churches. All of them had to go through several wars, subjected to destruction and to be restored. The most famous Smolensk considered several temples:

The first three of the church - the oldest dating back to the Mongol invasion. All actions are open to visits and prayers. Part of the building Lower St. Nicholas Church given to the Orthodox school.

As Smolensk and in manyhistorical and cultural monuments, most of which are associated with the past on the Smolensk land wars. Take a tour around the city, tourists are sure to stop at the monument to the legendary Kutuzov, enter the Square of Memory, where the memorial pays tribute to memory of soldiers who died in World War II.

After all the sightseeing, guests of the city likewalk in Blon - city park, popular among residents of Smolensk. Admiring the light and music fountain and passing by the monument to Mikhail Glinka, who was born in Smolensk, travelers like to look back and remember the impressions gained from this.

Tourists are always the most pleasant memories of Smolensk and its many attractions. Those who have been here at least once, certainly want to come back here again.