Home>Articles on Russia>Inspection of Omsk area. List of the best viewing points in Omsk

Inspection of Omsk area. List of the best viewing points in Omsk 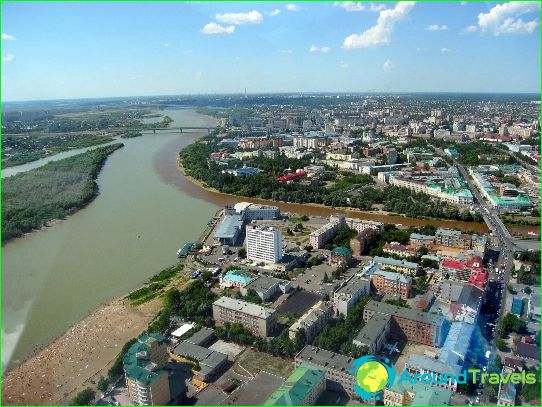 The plan included the rise of your holiday on the lookoutsite Omsk? You will be pleasantly surprised by the opportunity to admire an unusual angle Christ Cathedral, apart merchant Batiushkov, Tarski gates and other objects.

The observation deck on the street Valikhanova

It will be possible to admire the Irtysh, and if necessary, to go down to the river bank.

Lookout Tower in the "Bird's harbor"

On the observation deck of the tower "Lighthouse" (its height -more than 13 m; gruzopodemnost- 600 kg platform able to accommodate 5-6 people) will be able to climb the spiral metal staircase to see the neighborhood of natural park and its inhabitants (in the lakes inhabited by waterfowl; colonies of migratory birds stop in the park).

Restaurant treats visitors to the author's kitchen(Duet European and pan-Asian cuisines) from the chef A. Khripunova. It enjoys the best views of the central part of business and Omsk (Friday-Saturday open until 06:00, and on other days - until 01:00).

Park named after the 30th anniversary of the Komsomol

The park offers a ride on anytwo rides "Ferris wheel", but the most interesting is the new 35-meter wheel (10 out of 20 booths closed, which implies a year-round skating), which are nice to look Omsk beauty (on the new attraction ticket will cost $ 100, while the old one, which 7 m below - 70 rubles).

Another observation platform can be found in the park of culture and recreation "Soviet" (address: Andrianova, 3) - hence the visible landmarks districts of the Left Bank, the Irtysh and the bridge across the river.

Meals in Luxembourg. Prices for food in ...