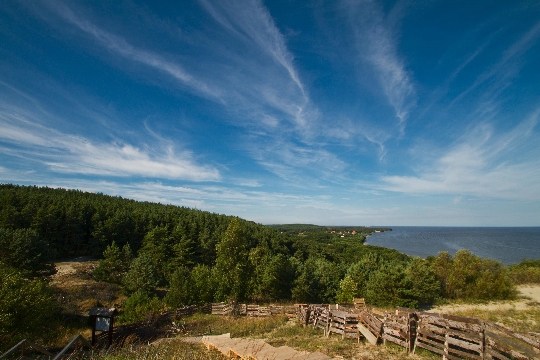 The huge territory of our country is divided intoseveral administrative districts, including in western Russia - ten regions united in the North-Western Federal District. For the traveler in that region is usually of interest not only St. Petersburg, but also some other cities and areas with a rich historical and cultural past.

The western border of Russia - it is Leningrad,Pskov and Smolensk regions, behind which begins the territory of the nearest neighbors - Finland, Estonia, Latvia and Belarus. Separately on the map stands the Kaliningrad region which does not have with the rest of the country's land border.

The points on the globe

Tourist Attractions West Russia are well known to fans of travel on their land:

Washed by the clear waters of the Baltic Sea Kaliningradland boasts many natural and man-made attractions. For their sake, the number of travelers visiting the West of Russia, is increasing every year.
The main destination of fans of beautifullandscapes - the Curonian Spit National Park sand dunes of the special kind. Their height often exceeds 30 meters, and the perfect white sand combined with the emerald green of the pines on the background of the waves makes the local scenery unique.
Amber - the second celebrity extreme westRussia. The main wealth of this land - the raw material for the production of great souvenirs and jewelry. His amber can be found on any beach of the Baltic Sea in the Kaliningrad area right in the surf.