Where to rest with a tent in Russia

Articles on Russia
by Antonio

Where to rest with a tent in Russia 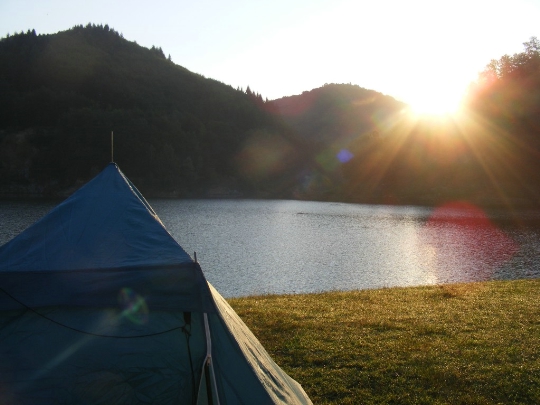 When planning to go on holiday with a tent, the firstand most importantly, that it is worth considering - it realistically assess their strength and not "overdo it" with the duration of the holiday. The vast majority of girls and women, even if they were determined to spend almost the entire vacation in a tent, and their eyes were burning sincere enthusiasm for the third, and even on the second day of stay in the nature in a tent will feel an irresistible desire to return to the benefits civilization. Men can feel comfortable in camp conditions for much longer, however, and they, especially the residents of large cities, stay in a tent tired fast enough.
Therefore, the best is the next option. Going in, say, a trip to the sea, the first three days of leave to live in a tent (the best - in a beautiful location away from the bustle of the resort towns), but then still move to a hotel or rent a house. Then the impressions of the holiday will be the most intense positive emotions. And the nature will take place harmoniously, without unnecessary irritation and fatigue. And the benefits of civilization, which we used to take for granted, will bring a good mood and will give new impetus to the next part of the holiday.

With a tent on the Black Sea. Big Utrish - a great place

One of the best places on the coastKrasnodar Territory is considered to be the natural reserve of the Big Utrish near Anapa on Abrauskom peninsula. Here, right on the shore of one of the bays and lagoons, you can find a really picturesque secluded place to camp. It does not matter if it will have to walk several kilometers on foot from the bus stop (if you arrived by bus from Anapa). It's worth it.
The place is really great. The ranges of mountains, covered with relict pines, oaks, hornbeam, juniper and pistachio, down almost to the water. In summer you can see a lot of amazing motley butterflies of different colors, most of which you have never met before. Nice to wake up in the morning to the singing of birds, of which there are many, too. You can find turtles. After washing dishes in the sea water can be seen amusing agile shrimp that swim and eat dishes washed out with microscopic particles of food.
Sea water is crystal clear, easy-to-coastbathing. Beach holidays combine well with the mountain, dedicating half a day hike in the mountains with a view to climb one of the peaks and enjoy the breathtaking view from there. Ascend, of course, will sometimes hard, but it is much easier to go down. You can spend one night not on the coast, but right in the mountains. Predators that can attack the man in these places do not have.

River holiday with a tent. Bear - a perfect river for canoeists

Many rightly considered the "major league"camping holiday kayaking on small rivers. It is for small, because such rivers as the Volga, kayaking nothing to do - no element of this vessel, and it is not interesting. Consider yourself lucky if you have a friend or acquaintance has a kayak and he is ready to take you to the second or third oarsman on a campaign. If not, then it makes sense to shell out for the purchase of not only the tent, and kayaks. For this "a vehicle" you can visit the places where really no man has gone, and where it is impossible to get even on the best jeep.
Perhaps the best small river to the tent andcanoeing holiday in the European part of Russia - Bear is a river, a tributary of the Don. It is good that, through continuous and intensive flow, it is always clean and clear water, odor slime, as it happens in other rivers, and suitable for swimming, sandy beach.
Dipper - is not only a strong, full-flowing, butMore and very diverse river. Starting, for example, in the village of Krasny Yar and swim in a kayak to the town of Mikhailovka (or even over a shorter route - to Danilovka), can be seen in the course of the promotion and wild steppes and dense forest and majestic mountain scenery. This refers not to the real mountains, of course, a powerful hills famous among ufologists and mystics Medveditskaya ridge. There's also a kayak will have to overcome a series of terrifying rapids with a furious currents and whirlpools, which is very strange to see on the steppe, not a mountain river.
The tent is put in place any vending onthe beach or on a river island. A shortage of beautiful places here. It makes sense to bring your fishing gear. Anyone who loves fishing, will be richly blessed with the river. We must not forget the sleeping bags - the night by the river to sleep in a tent is very cool, even if the day was July heat.

The only obstacle deters many fromvacation on Lake Baikal - is the high price of the flight from the European part of Russia to Irkutsk. But sooner or later, is instead another trip to the passive recreation to Turkey to spend money to get a real fairy tale primeval nature - on the Baikal island Olkhon.
To experience the beauty of these heavenly placesit will allow recreation in a tent. It is best to make it mobile. That is, to sleep in different places, moving along the coast. Because there is not only incredibly beautiful, but also a variety of places - on an island seven successive climatic zones. Places sacred, really fills the body and soul of a new vitality. It's hard to explain in words, it is best to go there.
Travelling with a tent on the Baikal should not be afraid to play it safe and warm to protect against rain things. The weather here is changeable, and after the heat can be quite windy, cold and wet.
For any of the above places suitable methodcombining the tent, "wild" holiday with the civilized. Stay full force of nature, and having stayed in harmony with it, happy to move to the camp site, in the hotel or rented accommodation, to take a warm shower and a full stretch on a clean ironed linens. So just bright, vivid, positive impressions remain on vacation.

A trip to Hong Kong