Articles on Russia
by Erin 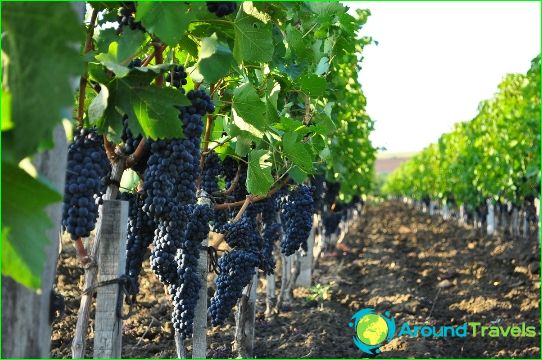 Residents of the southern regions of Russia quite successfullyengaged in winemaking for centuries. In the lower reaches of the Don, Dagestan and Astrakhan grapes are grown for thousands of years. Industrial scale production of wine Russia has adopted during the reign of Peter I, who ordered to break the vineyards in the area of ​​Azov after its capture in the Russian-Turkish war.

By the end of the XIX century the Russian Empire produced a sufficient amount of wine in the territory of the Don, the Caucasus and Astrakhan-Ural wine regions.
With the creation of the Soviet Union on the territory of these areasany winegrowing and socialist collective farms, wineries opened. Victory winemakers RSFSR was the development of sparkling wine, called "Soviet Champagne". It began to produce in 30-ies of the last century, the famous plant "Abrau-Durso" in the Krasnodar region.
The collapse of the USSR led to a significant reduction andthe areas under vines and the amount produced Russian wines. In just a few years, the number of hectares of vineyards has decreased by half, and for the manufacture of its products Russian wineries began to use 70% of imported raw materials.

The largest region, where the grapes are grown andproduce wines Russia is the Krasnodar region. The climate of the region and the agricultural traditions allow to receive the fruit of the area equal to 60% of the country's vineyards. Among the major wine areas in the region emit Taman, Priazovskaya and the North Caucasus, and the main production facilities are located in the wine-growing company "Abrau-Durso", "Caucasus", "Kuban-wine" and "Phanagoria".
In addition to the Krasnodar Territory grape growing in Russia:

How to fly from Pyatigorsk to Moscow? Time ...