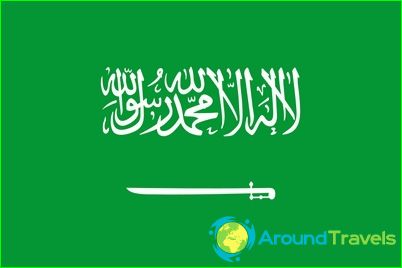 The Kingdom of Saudi Arabia as one of its state symbols using the national flag.

Description and proportions of the flag of Saudi Arabia

Saudi Arabia Flag - a rectangledark green color, on which are inscribed the shahada and white sword. The flag must be read the same on both sides, but because of two identical stitched together panels.
Shahada - is the main character in the position of faithIslam. It originated as a cry by which Muslims are distinguished by the infidels. She was part of during the entire period of the existence of religion in all Islamic prayer. Will serve as a rallying cry for many generations defenders and warriors of the Arabian lands, Shahada was the cause of the concept of "martyr".
Sword, applied to the flag of Saudi Arabia belowshahada, symbolizes the victory of man, whose residents believe its founder. Abdel-Aziz ibn Saud was the first king of the country and waged war for the unification of Arabia.
Shahadah on the flag of Saudi Arabia - the sacred symbol for Muslims. That is why the image of the flag on the garments, souvenirs and other paraphernalia officially banned.
An interesting feature of the flag is that it will never lower a little on the occasion of mourning, in whatever country of the world, he was not.

Green cloth with a woven on it Shahada -a symbol of the Wahhabi ideology, which appeared in the XVIII century in the Arabian Peninsula. Predshestvenikami modern state kingdoms were Hijaz and Najd. In the early twentieth century on the green field Najdi flag first appeared in the inscriptions of Arabic ligature, made in white. In 1921, Abdul-Aziz ibn Saud added the banner image of the sword. Then, the state flag of Nejd was slightly modified and along his shaft appeared white stripe, the width of which has been changed several times.
Meanwhile Hijaz flag had the appearance of a classictricolor in white, green and black stripes arranged horizontally. Then, on his flag added an isosceles triangle of dark red, located along the base of the flagpole.
In 1932, the Kingdom of Hejaz and Nejd at the cost of effortAbdel-Aziz Ibn Saud were merged into a state of Saudi Arabia, and six years later the flag of Saudi Arabia was adopted in its present form. As a symbol of the state, he officially approved in March 1973.

Demographics of Bangladesh. The population in Bangladesh: features, ...