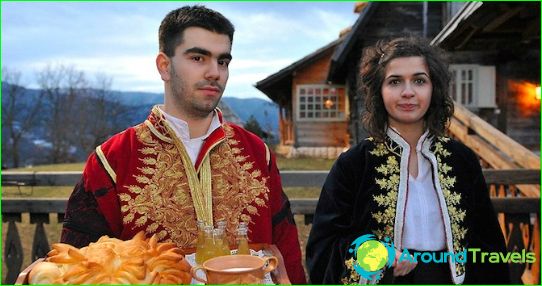 A huge influence on the development of Serbian cultureWe have Byzantine Empire and the Orthodox religion. In general, the Serbian customs and national traditions are very similar to the rest of Christian Slavic world. Monuments of history and architecture in Serbia - it is Orthodox monasteries and local cuisine like any European. Serbian music and dance - incendiary and energetic and crafts allow every tourist to take away home beautiful handmade souvenirs.

From Cyril and Methodius

Students of the first creators of the Slavic alphabet andChristian missionaries Cyril and Methodius contributed to the development of writing and, as a whole, the Serbian culture. The oldest surviving Cyrillic manuscript is dated 1185 year. This Gospel, created by order of Prince Miroslav. Of equal historical value and is a "Chronicle of the Serbian princes" of the tenth century in the Serbian language.
At the end of the twelfth century Serbian literature getsorder to develop thanks to the emergence of a huge number of Bulgarian and Greek works translated. The desire to contribute to the emergence read their literature, and the first writer of the Serbs believe Sava, which at the beginning of the XIII century of the life of his father.
An important place in the early national literature took heroic works, tells the story of the exploits of the Serbian princes and their military squads.

Historical heritage of Serbs manifested innumerous architectural monuments that have survived since the Middle Ages. The most significant fall in the honor list of World Cultural Heritage by UNESCO: