Home>Articles about Serbia>Serbia Flag photo, history, the value of the state flag colors of Serbia

Serbia Flag photo, history, the value of the state flag colors of Serbia 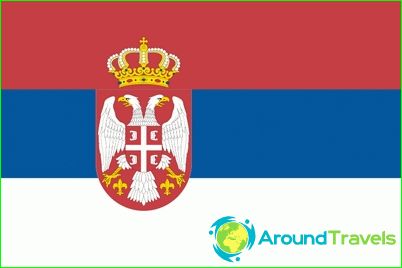 Serbia - an amazing country that is richits history, high national spirit and the events that began in the country, dragged them all over the world. Many historical and political events took place across the country. We all know about the former part of Yugoslavia and further quarrels and disputes in the adoption of the new symbols. Therefore, the flag, which is the official so far, in 2006, 17 August. Flag of Serbia, both in principle and all the flags is rectangular in shape. This rectangle is divided into three bands. The colors of these bands coincide with the flag of Russia and several other countries. The upper band - red, followed by blue and white. Of course, to discuss, why choose these colors are very difficult. However, the following options can be assumed.

It has long been thought that the blue - the colorhonesty and chastity. Therefore, this color Serbia is trying to show that its people honest. The red color symbolizes the love and courage of a country that has fought in all the soldiers who had fallen to its lot, for the sake of unity and love for his state. And finally, the white color - this color has long been symbol of peace and dignity. A distinctive feature of the Serbian flag is a flag that takes pride of place coat of arms of the country, it is located in all the bands of the flag. However, as in many countries, the country's flag is enabled and without emblem.

Coat of arms located on the flag shows twowhite eagles, looking in different directions with open beaks. They are located on a red shield, and over their head is a crown. The origin of the flag as the president of Serbia, said, embodies the unity of Russia and Serbia, as it is simply an inverted Russian flag.

Serbia itself - it's an amazing country thatIt is located at the crossroads of Europe. Serbia is rich not only with their revolutionary and political achievements, but also for its natural beauty. In this country, you can see a huge number of castles, the bounties of nature, monasteries, which have important historical value. National dishes are sure will amaze you with its simplicity and taste. People in this country are very friendly and all-loving. It can be said that Serbia - a paradise for travelers, which include in this country as its citizens.

Bus tours to Crimea. The cost of bus tours ...