Belgrade - the capital of Serbia 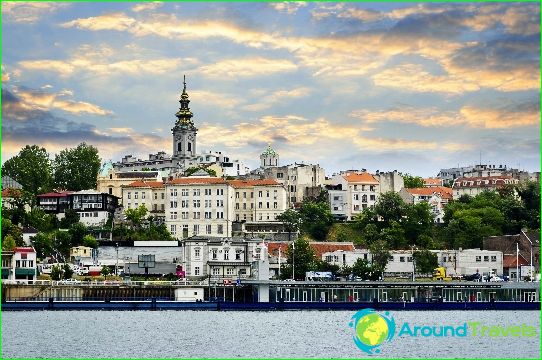 The capital of Serbia, Belgrade city has a surprisinglyrich history. Belgrade is located at the confluence of two rivers - the Danube and the Sava. The city was founded in the third century BC, many times destroyed and rebuilt again.

Today we have lots of happy Belgradeamazing architectural monuments. The city enchants not only fantastic places, but also the beauty of the fabulous streets, art houses. The local population is very sympathetic consideration to the guests of the city.

The first thing that is worth a visit in the capital, camehere the first time, - Belgrade Fortress. It is located on a hilltop, at an altitude of 125 meters. The territory of the fortress is divided into two parts: Upper and Lower Town. There are a huge lot of interesting from a historical point of view seats. You can admire the picturesque ruins of a Byzantine church and the ruins of an ancient Roman settlement. Will long remain in the memory and a walk through the local church and church.

At the fortress to the present day greatsurvived five towers. The most unusual - a tower, decorated with a huge clock. Previously, one of the buildings decorated with "talking" clock, but, unfortunately, they have not been preserved to our days. Log in to the castle is possible through the Istanbul Gate, dating from the 18th century.

Behind this name hides no majorBotanical Garden, or the like. House colors - actually a mausoleum where lie the former Yugoslav ruler - Josip Broz Tito. leader embalmed body lies in a closed coffin, unlike the Moscow mausoleum where Lenin's body on display. Around the mausoleum of a great variety of colors, as Tito during his life engaged in gardening. Hence, such an unusual name of this place of sorrow.

Especially a lot of visitors per day Flower HouseBirthday Tito - 25 May. Also not forgotten the death date. People come to honor the memory of Tito on 4 May. In the mausoleum there are other rooms that host personal belongings ruler - hookahs, gifts, clothing, etc.

Skadarlija - completely pedestrian quarter, where inWhile walking, you can listen to live music, enjoy the magnificent mansions, as well as dinner in a posh restaurant or a snack in a cozy cafe. Women should remember that the Skadarlija street lined with stone blocks, so by walking in high-heeled shoes should be abandoned.