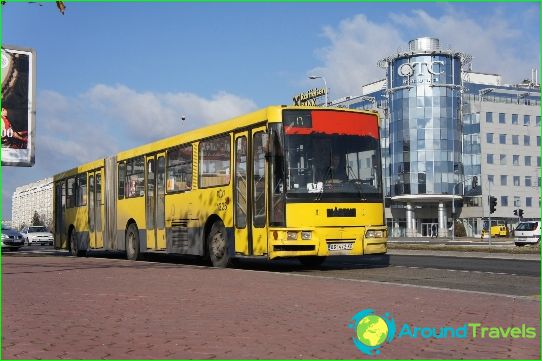 The transport system in Belgrade, especially the development of different, so tourists can mention the convenience of moving around the city.

Ticket price depends on the tariff zonebut it can be noted for the benefit of tourists, because the attractions are located in the same area. If you buy a ticket from the driver, you should prepare for significant overpayment. Wanting to save money, you can buy a ticket valid for a day at the newsstand. Remember that composting is mandatory, because otherwise be required to pay a fine.

For people who are also provided minibusesknown as the Mini Bus. This form of public transport has a high level of comfort. It should be prepared to ensure that the value is in vans than in buses. Minibuses can be caught just at the bus stop, as in other places they are not allowed to stop. Currently, there are eight routes, marked with the letter E.

It should be noted the possibility of a ride ontrain inside the city and all its suburbs. This transport in Belgrade is intended for patient people who have free time. "Beovoz" - trains the system, which consists of two zones and five branches. Two stations, namely "Karađorđe Park" and "ƃ spomenik", located under the ground. The minimum interval for trains is 15 minutes.

are 24 taxi companies in Belgrade. On the roofs of all licensed vehicles are installed just two tablets: TAXI, four-digit number. Each machine is equipped with counters, but if you plan to arrive by taxi to the airport, get ready for a fixed price. Order of the car on the phone allows you to get a 20% discount. A taxi can be beneficial.

For people who seek active wayLife operates bicycle rental, located at Savskogo lake. Some hotels also offer bicycles for rent. Option is advantageous, because there are special discounts every day.