Home>Articles on Singapore>Singapore Flag photo, history, the value of the state flag colors of Singapore

Singapore Flag photo, history, the value of the state flag colors of Singapore

Articles on Singapore
by Kristi 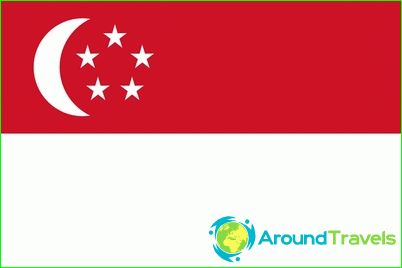 State flag of the Republic of Singapore established in 1959 and it became an indispensable symbol of the country, as the coat of arms and anthem.

Description and proportions of the flag of Singapore

Flag of Singapore - a classic rectangularshaped cloth, the width of which corresponds to its length at a ratio of 2: 3. The flag has two equal fields, separated horizontally. The lower part of the Singapore flag is white, and the top - a bright red. At the base of the flag on the red strip affixed the emblem of the country, which is a five-pointed star laid in a circle and crescent, covering their left. The logo is made in white.
For Singaporeans colors of their national flagThey have a special meaning. White symbolizes thoughts virtuous people in the country and their spiritual purity. Red box - the personification of the universal brotherhood of man on the planet and the pursuit of equality.
The new moon on the Singapore flag - a symbol of the beginningthe formation of the young nation, its rise and the desire to progress. Five five-pointed white stars are reminiscent of multiculturalism and peaceful coexistence of different religious and secular ideas.
The same emblem adorns the country's coat of arms andSingapore, on which are inscribed the star and crescent on a red heraldic shield supported by a lion and a tiger. These majestic animals are symbols of Singapore and Malaysia, whose composition in the country was before. Palm leaves, which are based on animals, made of gold and lie on a tape with the motto of the country "Forward, Singapore!".

The history of the flag of Singapore

For nearly a hundred years, Singapore wasA British colony. While the flag of the country served as a panel of dark blue, upper proximal to a staff quarter which represented the UK flag. On the blue field of the right half of the old flag of Singapore applied distinguishing mark Straits Setlements - British colonies in Southeast Asia.
National state symbol, flagThe Republic of Singapore was established on 3 December 1959, when the country still belonged to the overseas territories of the British Empire, but it was a self-governing state. Then, in 1963, the country held a referendum, the results of which Singapore was in a part of the territory of Malaysia. The conflict on ethnic grounds two years later became the cause of the country's exit from Malaysia and Singapore said on sovereignty. Then the flag was adopted again in connection with the proclamation of independence of the Republic of Singapore.

Airport in Alicante: diagram photo. How to get ...