Articles on Singapore
by Tori 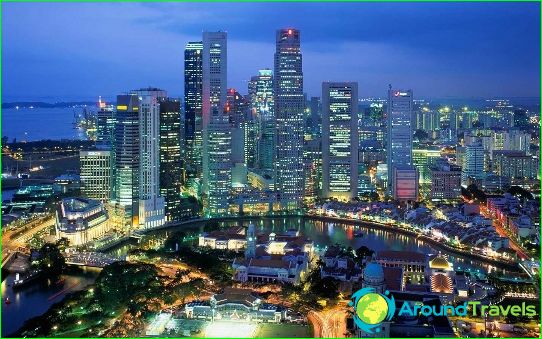 The city-state in Southeast Asia, Singaporeadvantageously differs from its neighbors by a combination of extreme exoticism and modern technologies, and its tourist attraction is also in the fact that here you can arrive at any time. Located in the equatorial climate zone of the city is practically not subject to sharp weather changes, and because the season in Singapore lasts 365 days a year.

Equatorial determines the location of Singaporeits climatic features. There is always smooth weather, the main feature of which - the high temperature values. Averages of July and of January, for example, do not differ significantly, accounting for 28 and + 26 degrees, respectively. Maximum thermometer can reach the height of the spring season in Singapore and demonstrate the March 36 degrees, but such extreme situations are rare.
The water temperature on the beaches near SingaporeSentosa island is different is the same stable from month to month. In winter, its value does not exceed 27 degrees, and in summer can be as high as 30. Precipitation in the country falls evenly throughout the year, and their level is slightly higher than the average in the period from November until the end of January.

In Singapore, there are many calendarholidays, during which time the number of tourists on the streets of the city is greatly increased. The country peacefully coexist representatives of four religions, each of which provides its own customs and rituals. One of the most interesting reasons to fly to Singapore in February - participation in the celebration of Chinese New Year. The dates of its occurrence are different every year, and in 2015 it will come on 19 February. For those who celebrate this day, the streets of Singapore are the main arena for the solemn and colorful processions. See thousands of soaring into the sky Chinese lanterns and taste the best oriental dishes during the celebration of the Chinese New Year - a great way to break out of the February Russian weather.
Christmas season in Singapore - this celebrationtraditional Christian Christmas, which is considered an important day for themselves 15% of local residents and thousands of tourists arriving. These days the city is decorated with Christmas lights, Santa Claus army invited to make a memorable photo and prices for sales at local malls melt at the same rate as in the ice buckets with champagne at a gala dinner at local restaurants.