Home>Articles on Singapore>Alone in Singapore trip routes. Travel to Singapore

Articles on Singapore
by Tori 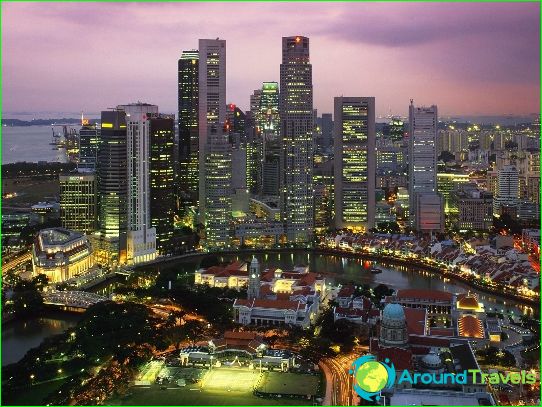 Despite the fact that the sea is Singapore,beach holiday here - not a good idea. Clean water in Singapore is not found even in a specially designated place for swimming, but because the holiday in this remote corner of the world is carried out by those who prefer exotic, mixed with modern achievements of mankind.

When to go to Singapore?

Temperature readings at 30 degreesis characterized in Singapore for any time of year. The climate is tropical, which are exposed to the monsoon, but because the rains happen regardless of the season. Especially the "wet" winter months are when squally showers can paralyze even for a few minutes work surface transport.

Direct flights from the Russian capital takeabout 10 hours, and the time in connecting flights depends on the location of the transit airport. Great prices and service traditionally offered Emirates and Qatar Airways, for which special offers independent travelers should keep in advance and on a regular basis.

The city, which is considered one of the maineconomic miracles of modern times, even a small number of hotels with stars on the facade offer decent comfort and service. Hotels in Singapore, typically located in a city and surrounding area are not. The procedure depends on the price and the name of the stars, but it is nice to find a cost option really, if you start to monitor the prices in advance. A major role can be played and location of the hotel, so you should decide exactly which attractions priority for inspection.

Restaurants in Singapore, as well as hotels - sampleservice and high service culture. Here you can find any cuisine and taste the most exotic dishes. Oddly enough, but Singapore's restaurants - a great opportunity to try Peking duck, which, according to seasoned gourmets, in no way inferior to that served in her homeland. Tipping is usually included in the bill, and therefore do not have to wrestle with how to thank the waiter.

Foremost among Singapore's entertainmentinvariably Universal Studios park on the island of Sentosa, where even adults for several hours become children. Fans of flora are recommended to visit the exotic futuristic gardens, where there are more than 200 thousand different plants.