Articles on Singapore
by Anna 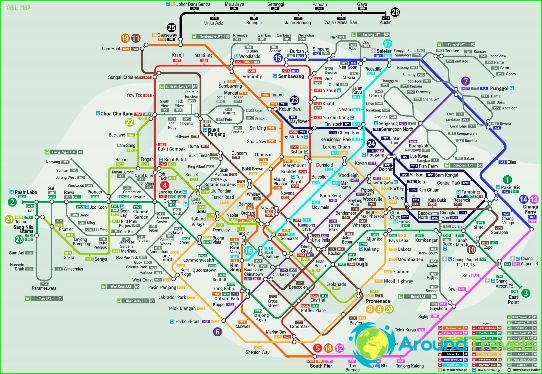 Driving in Singapore Metro
Singapore Metro (Mass Rapid Transit or MRT) -This rapid transit system, which covers the whole territory of the city-state. The first section between Yio Chu Kang and Toa Payoh was opened in 1987, making Singapore metro's second oldest in Southeast Asia after Manila. Since then, the network of lines is growing rapidly in line with plans to fully satisfy the requests of the population and adopt the Metro as the primary public transportation system in Singapore. Meanwhile, Singapore's metro bus inferior. In 2012, the average daily passenger flow meter was 2.649 million, accounting for about 76% of the passenger transport bus network during the same period.
Metro Singapore has a length of 153.2 kilometers, 106stations. Singapore Metro due to the light metro, and in the plans of the city - to connect all kinds of public transport among themselves. Metro opens at 5:30 and closes at 1 am (except for national holidays). Interval trains - from 90 seconds to seven minutes.

subway construction plans any more in 1967year. While the authorities have decided to question the profitability of the railway system with respect to the bus network. After lengthy debate, it was decided that, in any case, the bus routes is not enough for a developing city, the limited land space. Work began in 1983. and the first subway station was opened November 7, 1987. Six-kilometer line North-South, consisting of five stations, began to serve passengers. Later it was completed fifteen more segments, and March 12, 1988 it was announced the official opening of the Singapore Metro.

Each station is equipped with the Singapore subway has aTicket vending machines (GTMS), Passenger Service Centre, plasma displays, which show information about the movement of trains and urgent announcements. All metro stations are equipped with toilets and payphones. Some major stations have retail stores and kiosks, supermarkets, payment machines and automated kiosks for various services. Escalators in Singapore subway differ increased speed - they carry passengers up and down at a speed of 0.75 m / s, which is 50% faster than traditional escalators for us.
The first metro station solve functional problems. When their building design was given little attention. Architectural delights become important only at later stages, when each station became a unique work of art. With the discovery of the north-eastern metro line in the metro launched a program "The Art In Transit", in which at each station were organized exhibitions, and the platform itself took shape showrooms. The most beautiful station in Singapore recognized the station "Changi Airport" - the extreme east in the metro network, it has the widest platform and ranks 10th of the 15 most beautiful metro stations in the world.


Tickets for the Singapore metro

Tickets for the Singapore metro is available inmachines at the entrance to the station. Payment pozonnaya - fare depends on the route. Tickets are scanned for validator turnstiles and stored until the end of the trip - at the exit they are also scanned.
For tourists is available contactlesssmart card Singapore Tourist Pass. This card can be purchased at the box office some TransitLink and shopping centers. A deposit for the card is returned within 5 days from the date of issuance of the card.

Airport Sochi diagram photo. How to get ...