Home>Articles about Slovakia>Flag of Slovakia: photos, history, the value of the state flag colors of Slovakia

Flag of Slovakia: photos, history, the value of the state flag colors of Slovakia 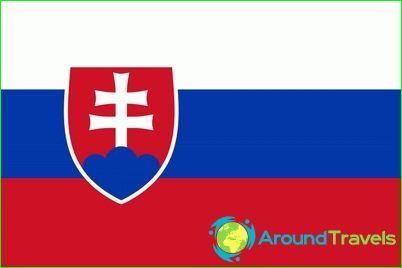 The official flag of the Slovak Republic - istricolor rectangular panel, the sides of which are related to each other in a ratio of 2: 3. On the field, the flag has three equal width stripes: red - bottom, blue - and white in the middle - at the top. On the left side of the field flag depicts an old coat, which looks like a white double cross on the blue triple mountain, made on a red field.

History of Slovakia flag is very old. Once these lands belonged to the Hungarian Kingdom. For the first time a white cross in a dark red field appeared in the symbolism of the Hungarian ruler Bela IV, to rebuild the country after the Mongol invasion of the XIII century. The double cross on the shield was the main symbol of the king of Bela, minted coins in his palace, and other attributes. He reminded about the brought in the ninth century Cyril and Methodius from the Byzantine double-patriarchal cross.

In the middle of the XIX century the Slovaks attemptedfreed from Hungarian domination. Their flag in the war of liberation was the red-white flag that they raised in the forefront of their troops. On Slovaks assistance, on the side which is made, and Austria, came to the Russian troops. Nicholas I considered it my duty to support the brotherly Slavic people. Russian Help came in handy, and Hungary was defeated, and was added to the flag of Slovakia blue stripe in honor of the Russian State.

In 1939 on the territory of present-day SlovakiaThe first was created by the Slovak Republic, approved a simple tricolor as the national flag. At the end of World War II, Slovakia was united with the Czech Republic in a single state, and at some time of their own flag had to forget. 1990 brought together with the Velvet Revolution and the change of sovereignty of national tricolor simvolov.Tak returned to the flagpoles of the country, but its appearance has changed a bit. Fully coinciding with the Russian in appearance, Slovakia flag demanding unique, only to it inherent characteristics. It was then in the country and recalled the Hungarian King Bela IV and his shield with a double white cross. Today, this distinguishing mark symbolizes the tradition that Felvidek or current Slovakia was once part of Hungary. Three azure mountain, carrying the cross - a Tatra, Fatra and Matra, where Slovaks lived since ancient times. Today on the territory of Slovakia is actually located only two of them.

Rent a car in Estonia. Car Rental in ...