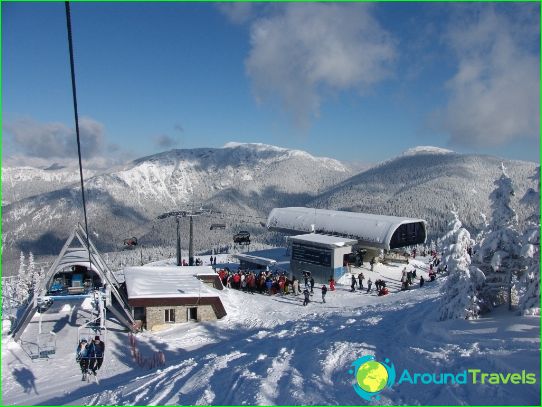 A small and cozy Slovakia lies in the heartEurope, and much of its territory lie the mountains - High and Low Tatras and Carpathian arc. Climatic features of the mountainous part of the Slovak allow all fans of snowboarding and skiing freely indulge in a favorite sport for quite a long season.
The advantages of winter recreation was in Slovakiainclude more low in comparison with the big brothers in Western Europe, the order of prices and equipment rental. Special attention is given a great kitchen, where masterpieces in Slovakia restaurants you can taste in their spare time, sports. Eco-friendly mountains, crystal air and magnificent surroundings complement the list of advantages of the ski resorts in Slovakia.

The resort Jasna in the Low Tatras

Jasna is located in the mountain range, whichis the spurs of the Carpathians. This place can not offer their fans especially high peaks, but its infrastructure, thermal springs and groomed trails invariably attract many athletes. Mountain Home at the resort - Chopok - located in the national park. Jasna has often been the scene of international competitions in alpine skiing European level.
The season usually starts at the resort in earlywinter and lasts until early April. Just Yasna about 60 km of trails, including the allocated area for beginners. It is there at an altitude of about 1500 meters built a great snow park. He is considered the most modern on the slopes of Slovakia. And in the park for the first time have the opportunity to get on board for beginners and challenging work somersault - the pros.
Do not forget to Yasna and pro-boarders kids. They equipped the children's snow park, GDSs rebyatnya willingly training under the supervision of competent trainers from the local ski school. Among the instructors there are Russian-speaking, and because Jasna is becoming increasingly popular with Russian families snowboarders.
Ski passes to purchase immediately profitable for the whole holiday. Movement within the Jasna convenient free shuttle bus that runs between the complex ski and local water park.

The resort Donovaly in the Low Tatras

This area for winter sportslocated between the ridge of the Low Tatras and the Great Fatra mountain range. In Donovaly there is a division into two areas, the first of which, Záhradište, more suitable for very green boarders and skiers. Areal ski Nova hola lovers of extreme sports - track is complex, and some slopes, and all are able to overcome only pros.
The first athletes appear at the resortmid-November, and the closing of the season usually falls in April. The total length of 17 runs is small - about 11 km, but seven of them are supplied with fresh snow with the help of guns and some artificially illuminated in the evening.
Total 600 meters of trails reserved for the resortriding snowboarders, but because Donovaly unlikely to be of interest to advanced athletes. But for those who make the first steps, the local slopes seem safe and uncomplicated in skating.
The advantage of a trip to the ski resort Donovalywill and a varied entertainment program in his spare time mountain. You can not only relax in the sauna or come off at the disco, but also to participate in the regular season for dog sledding.

Tatranska Lomnica in the High Tatras

This resort is located in the second highestMountains in Slovakia - Lomnicky Peak which soars into the sky at 2632 meters. At the foot of the mountain stretches of the local entertainment center - Village Skalnaté Pleso. The season starts at the resort at the beginning of calendar winter and ends in April.
Trails in Tatranska Lomnica laid at a height of800 to 2,200 meters, they were athletes deliver 12 lifts. All slopes for beginners Yami area stretching for 10 km, of which only one is considered to be difficult. And because this is the place for winter sports especially attractive for beginners and families with children. Lomnické Saddle Zone offers excellent trails, labeled as black.
Snowboarder offered a few runs, which can be attributed to the average level of difficulty trails.

Resort Smokovec in the High Tatras

It can be called a modern technicallyequipped resort with good infrastructure, despite the fact that Smokovec - one of the oldest ski areas in Slovenia. Season, as elsewhere in the country, runs from November to mid-spring.
The resort in the area of ​​Novy Smokovec worksexcellent ski school, where professional, including the Russian-speaking instructors put on a snowboard or skis everyone. Area Stary Smokovec has three routes for inexperienced and black slalom descent Horna Luka, beginning at an altitude of 1500 meters.