Home>Articles about Sweden>Sweden Flag photo, history, the value of the state flag colors of Sweden

Sweden Flag photo, history, the value of the state flag colors of Sweden 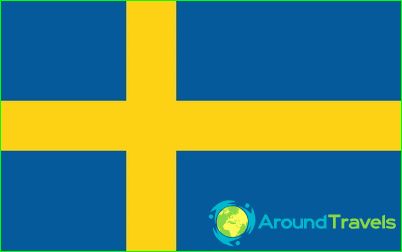 Swedish flag has been around since the XII century,so the story of its origin is little known. Other legends tell about the origin of the flag is blue, where bright yellow Scandinavian cross is located. According to Swedish law, rectangular panel dimensions correspond to the width to its length like 10 to 16.
Legend has it that during the prayer of King EricIX before the fight with the tribe Finnish paganism was presented a golden cross in the rays of the sun, reflected in the blue sky. King Eric and his men won the battle, and then the main color symbolism of the Kingdom of Sweden have become yellow (gold) and blue (cyan).
The existence flag mentioned in Swedenhistorical documents of the XV century. There is an assumption that the early proportion of 5 to 8, copied from the Danish cloth and colors taken from military coats of arms of the Swedish army. Battle shield, divided into four parts, were adorned with three crowns of Sweden and Dynasty lion Folkungov. Such symbolism for his soldiers brought Charles VIII in the middle of the XV century. From these historical events and went symbolic decoration emblem and the flag of Sweden. Royal Decree was introduced stating that a yellow cross must be present on a Swedish personal and battle flags.
There are a few different version of the appearance of the SwedishFlag: colors can be borrowed in the XIII century in the royal emblem of King Magnus I Ladulosoma or in the XIV century - from the coat of arms of King Albrecht Meklenburskogo. Some sources say that initially the Swedish flag was white, not yellow or blue. And in the beginning of the XV century, the color of the flag was changed.
Since the story says that the Swedish flagcopied from the Danish flag, it is possible to design has been used as symbols of opposition to the Danish government. The Nordic countries represent a cross on their flags, as well as the Swedish flag, which means the overall unity and history. At the beginning of the XIX century, Norway and Sweden used a flag.
Day dedicated to the Swedish flag, note 6June since the beginning of the XX century, and this day was declared as the National Day of Sweden. Why did you choose that number? Because in this day in the XVI century it was crowned Gustav Vasa, who became King of Sweden, which gave rise to the independence of the state. And in 1809, on the same day Sweden has established a new constitution that gave more authority and freedom of action for citizens of Sweden.

Children's camps in Israel for the summer. Children's ...

Holidays in Greece in December: the prices and ...