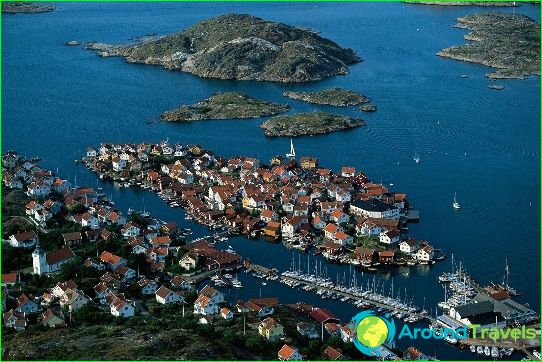 In Northern Europe, located the Kingdom of Sweden,in which structure there are many islands. The most significant in size are the following land areas:. Wen, Bjork, Adelso, visingsö, Gotska Sandon, etc. Islands in Sweden are located in the Baltic Sea and the Gulf of Bothnia. The largest island in the Baltic - Öland and Gotland. State boundaries stretch for 2233 km. From Denmark, Sweden separated Skagerrak, Kattegat and Oresund.

Near the city of Piteå and Luleå, in BothniaGulf, located island group famous for its beautiful nature and cultural attractions. This Stockholm archipelago, which included, there are about 24 thousand islands. He was removed from the city for 80 km.

Near the east coast of the country is spreadEstgёtsky archipelago. In fact, it consists of three Islands: Tyust, Grüt, the archipelago of St. Anna and Arkёsund. All the islands of Sweden in an area covered with vegetation. Barren rocks are very far from the sea.

In the south-east coast of the archipelago is located10 thousand islands. It stretches along the towns Mёnsteros, Västervik, Kalmar and Oskarshamn. The most significant island of the group - Eland. It is a popular Swedish resort and is famous for shallow waters and sandy beaches.

Sweden located in the northern latitudes, butthe climate is temperate. Relatively warm weather allows for Gulfstream. From the Atlantic winds Scandinavian country is protected by mountains. Winters in Sweden are cold and summers are short. On many islands of the Baltic climate is softened by the warm Atlantic winds. Average summer temperatures in the country is 17 degrees. In January, the temperature is -14 degrees. Islands of Sweden, located in the Baltic Sea are characterized by warmer winters. In the summer rainy in the area. The northern areas are covered with taiga trees, a southern lands have mixed forests. In the north, dominated by subarctic climate.

Sweden Islands are characterized by undulatinglandscapes, stony soils and coniferous forests. Most of the state is forested. The islands with abundant vegetation interspersed with barren and rocky areas. The country's capital - Stockholm, occupies 14 islands. World fauna in Sweden is not very diverse. It is home to no more than 70 species of mammals. The reindeer live in Lapland, and brown bears and lynx - in the taiga.

Where to eat in Stockholm - cheap and ...

Holidays in Portugal in June: prices and ...