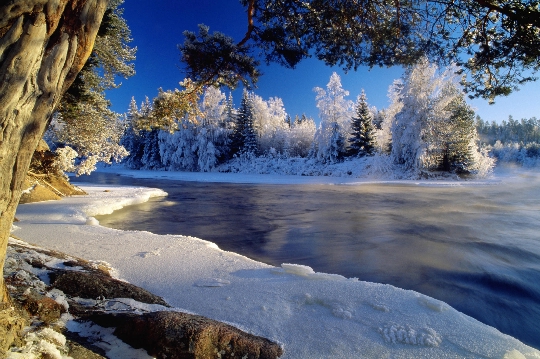 Landscape features of the country especiallyare favorable for the development of an extensive river system. Mainly Swedish rivers making their way through the narrow valleys. In addition, the flow is often cut off by elegant waterfalls.

The bed of the river runs through the southern part of Sweden. The total length of the river - 142 km. Source Viskan - water lake Tolkevan located on the territory of the county of Västra Götaland. Passes for as Lena and Halland, where the mouth of the river - the Kattegat Sea. The largest city on the banks of Viskan - Boras.

Geographically, the channel is in the southern partcountries. The river is quite small - just 95 kilometers away. The source of the river - lake Vänern. Then Göta Älv crosses the country in the south-westerly direction and ends the way in the waters of the Kattegat bay. Upstream has a mountain character and abounds with waterfalls and rapids. But at the bottom of the river is navigable.

Geographically located in dalälventhe central part of the country and takes place on the following lenam: Dalarna; Gävleborg; Uppsala; Västmanland (the natural boundary of the territory). Water flows into the Gulf of Bothnia (Baltic Sea).

Dalälven formed by the merger of two rivers: Esterdalelven and Vesterdalelven (the confluence is located near the village yurosi). The total length of the river - 220 km.

This river, originating in the lake and GranshёnWater flows into the Gulf of Bothnia. The total length of the river - 225 km. The river forms a full ten waterfalls. And the highest falls with a 25-meter height.

The river passes through the territory of the county of Norrbotten. Located Kalix River in the northern part of Sweden, and so covered with ice from November to May.

The total length of the river bed - 450 kilometers. The source of the river is located in the mountains Knebnekayse. The river then take the eastern direction and successfully finishes its way, flowing into the Gulf of Bothnia. The upper flow of the river is rich in lakes and waterfalls.

The source of the river - a borderline lake Rugen (borderSweden and Norway). Then the river rushes to the Norwegian lake Femen, passes through it and is again in Sweden. Until the early nineties of the last century klarälven system - Göta Älv used to float timber.

Located in the central part of the country and has a length of 460 kilometers. Source Ume River - Lake Everuman. It flows into the river in a traditional water Gulf of Bothnia.

Upstream rapids, forming waterfalls, andand numerous lakes. The largest left tributary - Vindel-Elven - the length is only slightly inferior to Ume River (445 kilometers). The river freezes and stays under the ice in the period November - May. The strength of the Ume River flow is used by several hydroelectric power plants.

Education in Poland. Study in Poland - ...