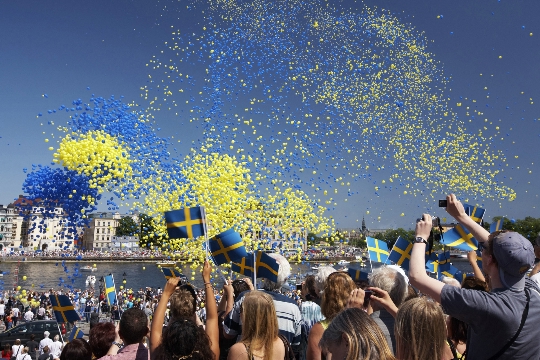 Swedes like their comrades in the ScandinavianBrotherhood: they are a bit restrained in emotions, unhurried, courteous and polite. Historically developed Swedish tradition based on reverence and respect for nature, which is for most of them, and now the mother-nurse. Hunting, fishing and agriculture - important items of income of the Swedish economy and in our time.

So it is possible to rephrase in Swedishversion of the famous saying about the bread. Fish prevails on the table in each of the local family and in accordance with the Swedish tradition of her preparing a huge number of simple and complex dishes.
The most surprising and controversial fish dishSwedes - surströmming. Canned pickled herring has a very pungent smell, but despite the questionable taste of dignity, is considered an exquisite delicacy buffet. The history of its appearance is calculated for centuries, and the recipe is explained shortage of salt in the Middle Ages. Celebration in honor of the start of sales of "new crop" sour herring - one of Sweden's most interesting traditions.

In honor of waffles and muffins

Culinary delights are so largevalue for the Swedes that they are ready to celebrate the holidays devoted to biscuits and other confectionery masterpieces. Waffles in honor of the Annunciation, and baking with cinnamon pays tribute at the beginning of October. These buns are considered a symbol of the country and all the restaurants and cafes during the festival offer a favorite delicacy with huge discounts.

One of the Swedish Christmas tradition isthat people give each other a promise of different properties. Vow it is necessary to perform, but because the Swedes often ask their friends and family to think of something that they themselves do not have enough willpower. Implementation of these commitments is considered a matter of honor, and many weak-willed citizens to manage in such a way to give up bad habits, for example, or to lose weight.

Going to Sweden, it is important to have an idea about the habits and mentality of the locals to chat with them gives only positive emotions: