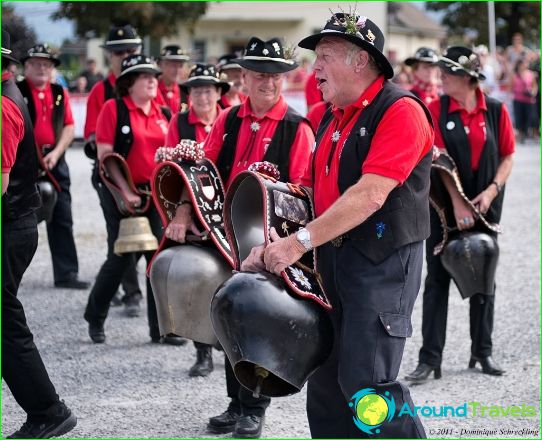 The only national holiday of the countryIt is an event dedicated to the base of the Swiss Confederation. It is celebrated in all the country's cantons August 1st. The rest of Switzerland holidays, for the most part religious, can be called local because they are specific to each part of the country.

Do you want to get on the ball monsters? Then be sure to visit Lucerne - the most popular tourist city in the country. Here, since the XII century, Monster Carnival is held annually. You will see a myriad of monsters and ghosts, which pleased the locals dress up. It begins with the celebration of Fat Tuesday and ends on Ash Wednesday - on the eve of Lent.

On Tuesday, in the early morning (5 hours), the city wakesloud drumbeat. This signaled the start of the holiday. Full day city is filled with music and crowds of revelers dressed in fabulous costumes and masks. In the evening, the streets are big concerts. Carnival ends with the onset of midnight.

Friday and Saturday - the days when such masquerades are held in other towns of the canton. The final chord of the festival becomes a monster concert, held in Lucerne on Myulenplatts area.

Zurich residents each year celebrate,somewhat reminiscent of Russian Shrovetide. We have to date to the third Sunday in April, but still captures and Monday. Residents of the country are called Sechseläuten holiday, and it is also the wires of winter. The culmination of the festival is becoming a huge effigy burning.

Holiday really like the inhabitants of the country, therefore,Zurich these days just crowded. Depending on how quickly burns effigy, you can determine the weather for the whole summer. Head-stuffed snowman stuffed with a small amount of explosives. Once the flames flare up, you will hear an explosion. And the sooner the snowman's head smashed to pieces, the more hot and sunny summer is waiting for you ahead.

Bern every mid-May welcomes guests,arrived on Geranium Festival. Tuesday and Saturday - traditional market days. Residents of the city can buy fruit, cheese, vegetables. But in May, the city's main Bundesplatz turns into a huge flower market, laden with baskets of geraniums.

But geranium adorns the city, not only in May. Residents love this flower and geranium can be seen everywhere.

How to fly from Kazan to Moscow? Time ...